A family of finite-temperature electronic phase transitions in graphene multilayers

The discovery of graphene –a single crystalline sheet of carbon atoms– represents a true breakthrough because not only showcases the amazing level of material control that has been reached, but also it has enabled the observation of a plethora of fascinating physical phenomena. It has been appreciated since the very first days that graphene layers of different thicknesses do represent physical systems with distinct physical properties. Graphene bilayers, for instance, behave very differently from individual monolayers and are themselves at the focus of very intense research. As for thicker layers (e.g., tri, tetra, penta-layer graphene, etc.) it has been always assumed that their properties would very rapidly approach those of graphite, the bulk materials out of which graphene is exfoliated. For this reason, only limited experimental work has been devoted over the years to these systems. 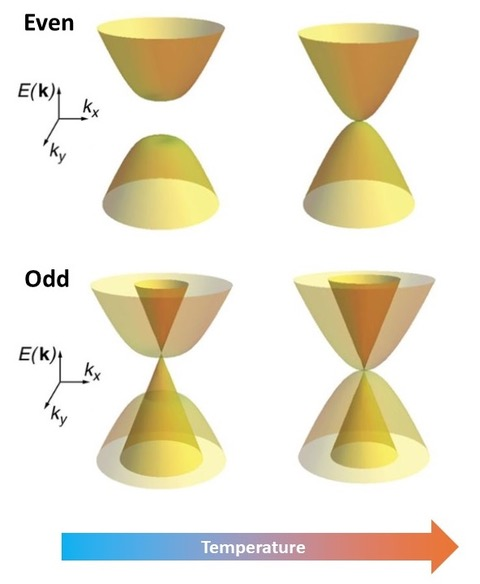 Work done in the group of Prof. Morpurgo at the University of Geneva now shows that this assumption is incorrect, and that interesting new physics are at play also in multilayer graphene of unexpectedly large thickness. In a publication recently appeared in Science, YoungWoo Nam, DongKeun Ki, David Soler Delgado and Alberto Morpurgo have shown that the properties of ultra-clean multilayers –up to hepta-layer– graphene deviate more and more from those of graphite as their thickness is increased. In particular, multilayers consisting of a stack of an even number of monolayers exhibit a transition to an insulating state below a critical temperature, which increases upon increasing thickness concomitantly with the size of the gap between conduction and valence band. For multilayers consisting of a stack of odd number of individual monolayers, the same transition occurs, but in this case a linearly dispersing band of Dirac fermions remains un-gapped and the systems continue to conduct electricity. The phenomena are the result of interactions between electrons that –in most cases– had been believed not to play a very important role in graphene systems.

Besides showing that in graphene multilayers electrons are strongly correlated due to interaction processes, these results pose an important question as to how the properties of graphene evolve into those of graphite upon increasing thickness. Having proven false the belief that basic aspects of the behavior of graphite are recovered already in tri or tetra-layer graphene, there is still an unanswered question: on which length scale will graphene multilayer eventually show graphite behavior? The current work indicates that very large deviations may continue up to 30-40 layers, past which thickness some new regime should set-in. Whether this regime would correspond to that of graphite bulk behavior, or whether for that even larger thicknesses are needed remains to be understood.