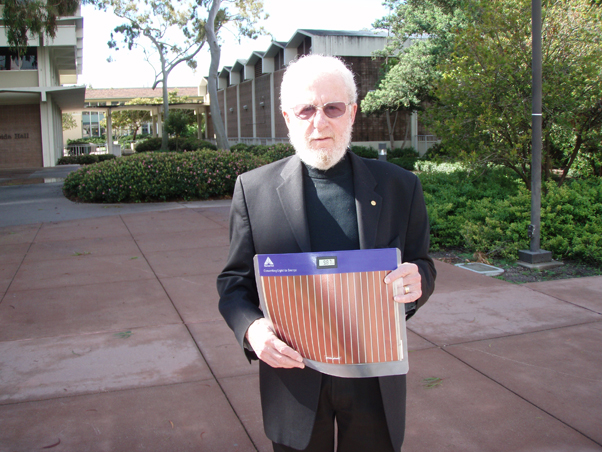 Thursday, October 15th, Alan Heeger, Professor of physics and materials science at the University of California, Santa Barbara, and winner of the Nobel Prize in chemistry, will give a lecture entitled "Plastic Solar Cells: Self-Assembly of Bulk Heterojunction Nano-materials by Spontaneous Phase Separation". It will take place at 6.30 p.m. in the Grand Auditorium of the School of Physics, 24 quai Ernest-Ansermet.

Alan Heeger obtained the Nobel Prize in chemistry in the year 2000, along with Alan G. MacDiarmid and Hideki Shirakawa, for the discovery and development of conductive polymers, in particular for his research on polyacetylene.

Born in Sioux City, Iowa, Alan Heeger studied physics and mathematics at the University of Nebraska-Lincoln and received a Ph.D. from the University of California at Berkeley. After a first position in Pennsylvania (1962-1982) and a position as visiting professor in Geneva (1968-69 Guggenheim Fellow), he became full professor at the Departments of Physics and of Materials in 1982 at the University of California at Santa Barbara, where he is still active, among others in the development of organic solar cells and organic electronics, made with flexible, plastic-like materials.

Alan Heeger has over 900 publications in scientific journals and more than 50 patents. He is co-founder of several companies, such as Uniax Corporation, which was acquired in 2000 by DuPont. In addition to the Nobel Prize, he has received many awards during his career (Oliver E. Buckley Prize for Condensed Matter Physics, Balzan Prize for the Science of New Materials, President's Medal for Distinguished Achievement from the University of Pennsylvania, Chancellor's Medal from the University of California).

He is passionate about the theater, has already produced several plays on Broadway, and has himself played the role of Niels Bohr in 'Copenhagen' by Michael Fraynes.