In the French-speaking part of Switzerland, the consolidation and expansion of the scientific branches related to all the different aspects of medicines was made possible with the fusion of the Geneva and Lausanne Sections of Pharmacy into the School of Pharmacy Geneva-Lausanne (EPGL), in 2004.

The restructuring of teaching activities was facilitated by the simultaneous implementation of reforms according to the Bologna model. Consequently, it is now possible to study for a bachelor’s degree in pharmaceutical sciences and either a master in pharmacy (which leads to a pharmacist diploma) or a master in pharmaceutical sciences (designed more specifically for students going into industry or research). This latter alternative is open to students with a BSc in other disciplines, such as biology or chemistry.

The activities of the EPGL often necessitate close links with institutions (the WHO, for example) and industry, both on a national or an international scale. But the most important collaborations are with research groups from the Universities of Geneva and Lausanne (biology, chemistry, medicine) and with the teaching hospitals of the region. 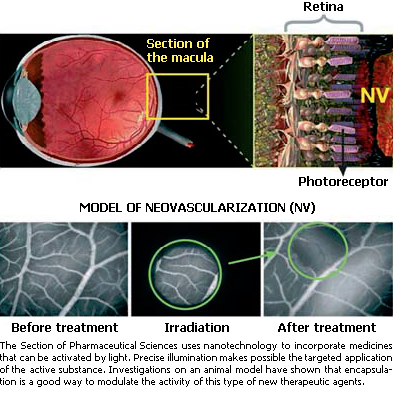 The research activities undertaken at the Section of Pharmaceutical Sciences fall into two categories:

This second category is illustrated by a study focusing on the treatment of age-linked degeneration of the central part of the retina (macula), which is the primary cause of blindness in industrialized countries in people over 50 years old. Photodynamic therapy is used, with the aim of limiting the excessive growth of blood vessels (NV), the root cause of the disease.