The period from about 370,000 years from the birth of the universe, to about a few hundred million years, is called the Cosmic Dark Ages. The first stars and galaxies were yet to form, and most of the atoms in the Universe were those of neutral hydrogen. The end of the Cosmic Dark Ages was marked by Cosmic Dawn, when the first stars and galaxies formed in the Universe. Directly observing this period represents the “final frontier” of surveys in the field of cosmology today. 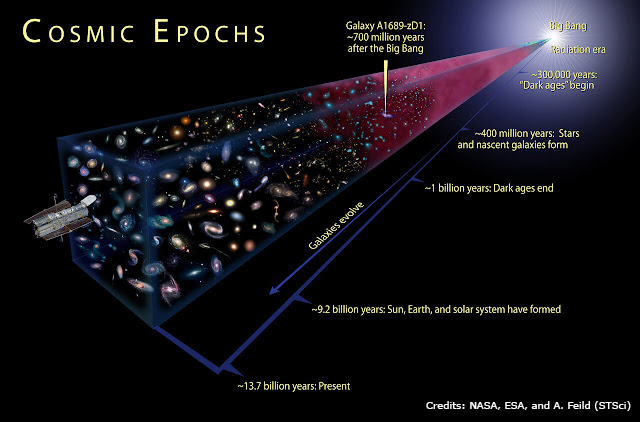 As described in a new review by Dr. Hamsa Padmanabhan, a theoretical physicist, Collaboratrice Scientifique II and the principal investigator of the Swiss National Science Foundation (SNSF) Ambizione Grant at the Université de Genève, the ability to see the Cosmic Dawn is capable of providing answers to some of the greatest open questions in physics and astronomy today.

The Cosmic Dawn signalled the start of a period known as “Reionization”, when the light from the first stars converted the neutral hydrogen in the Universe back into protons and electrons. Cosmic Reionization is believed to have ended at about 1 billion years after the Big Bang. Observing this period is challenging because detection of the very faint signal coming from hydrogen, the most abundant element, is difficult. The best option involves searching for a signal emitted by hydrogen atoms in radio waves, which is quite weak. For example, the signal from Cosmic Dawn is contaminated by the same signal which our galaxy, the Milky Way, produces, which is at least ten thousand to a hundred thousand times brighter.

However, access to this period also gives us the most information that we will ever have about the Universe. More than 90% of ordinary matter resides in these epochs of the Universe, providing access to at least 10000-100000 times more information content than is available in surveys today. This treasure trove of information is of great significance to test a whole range of theories of Fundamental Physics, especially those beyond the standard model of cosmology. Examples include non standard models of Dark matter, modifications to Einstein's general relativity, and clues about the nature of the first billionths of a second of evolution of the Universe.

Several missions across the radio, infrared, and visible light waves, are up and running (or in the final stages of development) aiming to detect the very faint signal from the Cosmic Dawn and Reionization. These include the James Webb Space Telescope (JWST), the Square Kilometre Array (SKA), the Carbon MonOxide Mapping Array Project (COMAP), and the Atacama Large Millimetre/submillimetre Array (ALMA). The ALMA, for example, detects galaxies in their emission from singly ionized carbon, known as [CII] and doubly ionized oxygen, known as [OIII], both of which are very interesting probes of star formation. Combining the results of different experiments in this way is called the multi-messenger view, which also includes gaining insights from gravitational wave signals from the first black holes in the Universe, to build up a comprehensive picture of Cosmic Dawn. Providing immense opportunities for collaboration and technological development, this approach promises to usher in a golden age of addressing our deepest mysteries in fundamental physics by conquering the ‘final frontier’.