Scientists at EPFL have developed a new laser-based technique that can measure ultrafast changes in the structural symmetry of molecules, called chirality, tracking their conformational shifts in real time. In a collaboration with researchers from the Universities of Geneva and Pisa, this breakthrough resolves a long-standing issue on how an important class of metal complexes switch their magnetic properties when triggered by a flash of light, and can have implications for magnetic data storage applications. 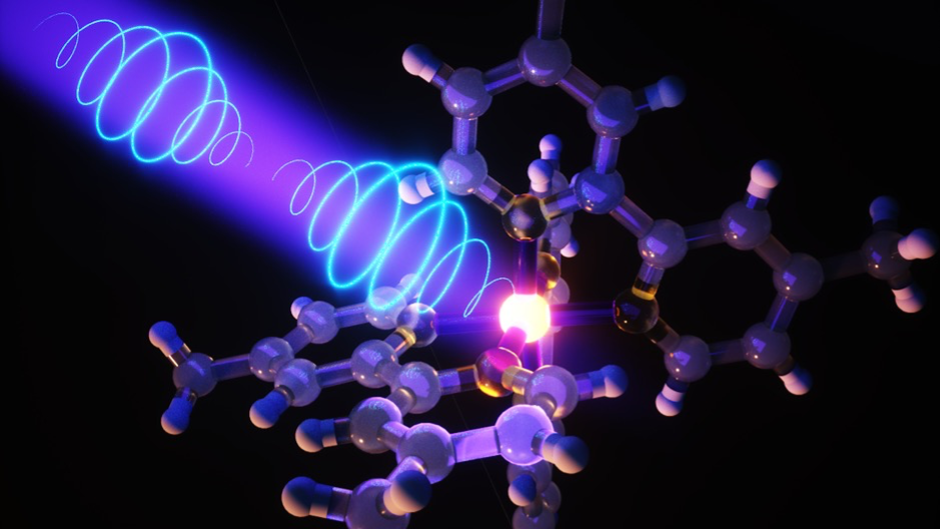 Chiral molecules exist in two forms, called enantiomers, which are mirror images of each other and non-superposable – much like a pair of human hands. While they share most chemical and physical properties, enantiomers can have adverse effects in (bio)chemical phenomena. For example, a protein or enzyme may only bind one enantiomeric form of a target molecule. Consequently, identification and control of chirality is often key to designing (bio)chemical compounds, e.g. in the food, fragrance, and pharmaceutical industries.

A most common technique for detecting chirality is called circular dichroism, which measures how chiral samples absorb left- and right-circularly polarized light differently to directly identify pairs of enantiomers. Circular dichroism can also help resolve the conformation of a molecule through its chiral response – a feature that has made it a popular analytical tool in (bio)chemical sciences.

However, circular dichroism has so far been limited in time-resolution and spectral range. Researchers led by Malte Oppermann in the group of Majed Chergui at EPFL, have now developed a new time-resolved instrument that measures circular dichroism changes in fractions of a picosecond (one trillionth of a second), meaning that it can “take” ultrafast snapshots of a molecule’s chirality throughout its (bio)chemical activity. This makes it possible to capture the chirality of photoexcited molecules and to resolve the conformational motion that drives the conversion of the absorbed light energy.

In a collaboration with the group of Jérôme Lacour at the University of Geneva and Francesco Zinna at the University of Pisa, the researchers used the new method to investigate the magnetic-switching dynamics of so-called “iron-based spin-crossover complexes” – an important class of metallo-organic molecules. In fact, the chiral 3-D geometry of the metal complexes can be controlled by two neighboring anions through remote interactions. This tight assembly of cation and anions, positively and negatively-charged molecules respectively, is a trademark of the asymmetric supramolecular chemistry pioneered and developed by the group of Geneva.

With this type of chiral 3-D control, carrying out a time-resolved circular dichroism experiment, the researchers discovered that the loss of magnetization is driven by a twisting of the molecule’s structure that distorts its chiral symmetry. Remarkably, the team was also able to slow down the decay of the magnetic state by suppressing the twisting motion in modified complexes.

“These ground-breaking experiments show that time-resolved circular dichroism is uniquely suited to capture the molecular motion that drives many (bio)chemical processes,” says Malte Oppermann. “This offers a new way for investigating challenging dynamic phenomena – for example the ultrafast rotations of synthetic molecular motors, and the conformational changes of proteins and enzymes in their native liquid environment.”