Magnetic vortices in superconductors are singular objects at the center of which the superconducting Cooper pairs are locally destroyed. As a consequence, the electronic excitations in their cores are expected to be fundamentally different from the ones occurring in the electronic superfluid surrounding the vortices. Scanning tunneling microscopy (STM) is the ideal tool to study these singular states, whose spectroscopic signatures are predicted to carry essential information about the intrinsic nature of the superconducting state. While vortex cores of “conventional” low-temperature superconductors are understood in great detail, past experiments revealed a very unusual electronic vortex core structures in high-temperature superconductors (HTS) not compatible with theory.

The article published in Physical Review X by Prof. Christoph Renner’s group shows the exploration of vortices in a HTS using STM at unprecedentedly low magnetic fields. The researchers reveal the vortices’ genuine electronic structure which turns out to be consistent with a 25 year old theoretical model.

Indeed, his behavior, which was never reported at high magnetic fields, is precisely the one predicted by Wang and MacDonald for a superconductor whose Cooper pairs wave functions are anisotropic in momentum space (known as d-wave symmetry).

The proper identification of these vortex core states is of prime interest to elucidate the mechanism driving high-temperature superconductivity, which still remains unclear. 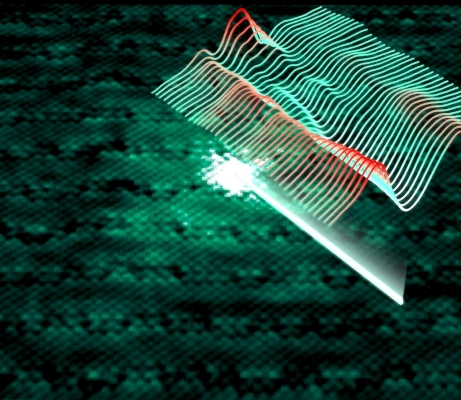