HIRAX collaborates with CERN on RFI testing of the HIRAX Correlator

The Hydrogen Intensity Real-time Analysis eXperiment (HIRAX) completed its Radio Frequency Interference (RFI) testing of the HIRAX correlator at the European Laboratory for Particle Physics (CERN) in Switzerland on June 17, 2021. The correlator was built by Swiss Partners at ETH Zürich (ETH-Z) and Université de Genève (UniGe), in collaboration with Canadian partners at the University of Toronto (UofT), through funding from the Swiss National Science Foundation (SNF) and will be installed on the HIRAX 256-dish array.

HIRAX is a radio interferometer of closely packed 6m dishes observing between 400 and 800 mHz. The array is currently funded up to 256 dishes with a possible future expansion to 1024 dishes. The array will be co-located with the Square Kilometer Array at the MeerKAT radio telescope site which is operated by South African Radio Astronomy Observatory (SARAO) in the Karoo, South Africa. The experiment will conduct ground-breaking science, including the cutting-edge fields of dark energy and fast radio bursts (FRBs). The collaboration is led out of the University of KwaZulu-Natal (UKZN) with seven additional South African consortium members and 17 international partners. The project is currently funded by the South African Department for Science and Innovation (DSI) and National Research Foundation (NRF), the HIRAX South African Consortium, McGill University in Canada, and a partnership of Swiss universities with funding from the SNF.

Prof. Kavilan Moodley, the HIRAX Principal Investigator and Professor at UKZN noted that: “HIRAX is a truly international astronomy project with key partners across the globe contributing to the development of the instrument.”

The Swiss partners at ETH-Z and UniGe have spent the last two years developing the HIRAX correlator with HIRAX partners at UofT and UKZN. This is a significant component of the cutting-edge HIRAX instrument, which consists of custom hardware and software. As the name suggests, the HIRAX correlator cross-correlates the signals from all telescopes forming visibilities. This is the fundamental data product of a radio telescope, which will be stored as the raw dataset for cosmology and map-making purposes. Prof. Alexandre Refregier from ETH-Zurich, noted that: “The HIRAX digital correlator is a key component of HIRAX and we have spent the last two years building it and testing it in Switzerland with our partners in Canada and South Africa”. Prof. Martin Kunz from the University of Geneva added, “We are very excited to contribute this core element to the HIRAX interferometer, an instrument that will enable new cosmological discoveries”.

Correlator engineer, Mr. Thierry Viant explained: “The correlator system is calibrated to receive large volumes of incoming data from the dishes. It is built using a graphics processing unit (GPU’s) board cluster, which is transmitted to 8 supercomputers.  Each computer is equipped with 1 terabyte (TB) of memory, 2 GPU’s for correlation computing, and 4 network interface boards to receive data inputs. We have received credible results using the dedicated astronomical software, Kotekan built by UofT.” 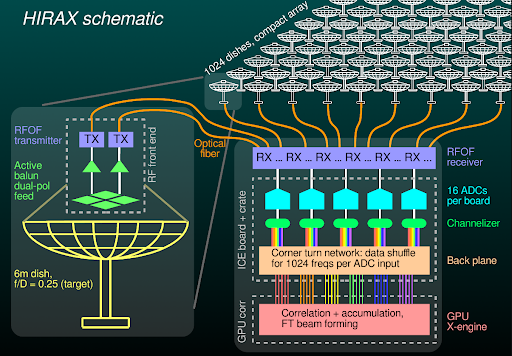 Credit: Prof Chiang, McGill University. Schematic overview of the principal hardware elements of the HIRAX instrument at full 1024 dish scale. The instrument’s dishes focus radio waves onto their receiver, the data is taken from each dish, via Radio Frequency over Fibre, to be digitised and channellised. Then the correlator cross-correlates the signals from all of the dishes, producing the data for scientific analysis. The GPU Correlator (or X-engine) is represented by the red box in the diagram.

Before shipment to the HIRAX site, the correlator needed to undergo Radio Frequency Interference (RFI) testing. RFI is when unwanted radio frequencies are detected in the data collected from a radio instrument, which can easily make collected visibilities unusable. RFI can be emitted by any man-made device with a capacity to produce signals in the radio band; including, cellphones, microwaves, and even an instrument’s own hardware.

The MeerKAT radio telescope site is radio-controlled, with strict regulations to ensure that the hosted instruments are protected from RFI. Because HIRAX is a guest instrument on the SARAO site, sharing space with several other radio astronomy projects including MeerKAT, HERA, and eventually the SKA, it is important that HIRAX not only protects its own data from RFI but is also a good neighbour to others. To ensure this, all HIRAX instrumentation will be subjected to strict RFI testing to determine if shielding or other mitigation tactics are needed to protect the site’s low-RFI environment.

Mr. Roufurd Julie, SARAO Guest Instrument Manager, commented on the RFI environment at SARAO: “By sharing a location with MeerKAT, HIRAX will be able to conduct science in an area where radio frequency interference is tightly controlled, a move that has seen MeerKAT producing groundbreaking scientific discoveries since its launch three years ago.”

To gain access to the necessary facilities to do RFI testing, the RF group from CERN was approached by ETH. The facilities at CERN are fully equipped to perform the rigorous testing needed to provide pre-qualification measurements, to clear the HIRAX correlator for installation on the SARAO site. In terms of the electromagnetic environment, CERN is a very unique place. Pico-Amps are often measured, but tens of kilo-Amps produced, with a required sub-ppm DC accuracy in a vicinity of megawatts of radio-frequency power. The cohabitation of such devices in terms of electromagnetic compatibility (EMC) in the accelerators represents a never-ending engineering and scientific effort. A small, highly specialized EMC laboratory was formed to provide support for such very specific, difficult cases for CERN accelerators.

Prof. Daniel Valuch from CERN commented on the HIRAX correlator testing, saying: “No two problems we had been following so far by our EMC lab were the same. We are typically looking at very specific and obscure problems deep in the accelerators – such as pulsed signals, cable interactions, low-frequency fields, high-frequency fields, perturbation to ultra-precise devices, and particle beams. Measuring the RF emissions from the HIRAX correlator, a powerful computing system, was definitely a great and interesting new experience for our small EMC laboratory.”

The results from the RFI tests were quite encouraging and showed that RFI emitted from the Correlator was much lower than anticipated. Our initial indications are that the level of RF shielding for the correlator at the HIRAX Site will not have to be extensive. Dr. Corrie Ungerer, HIRAX Project Engineer, and  RFI Working Group Lead, iterated that “tests were conducted in the range of 200 MHz to 14 GHz. Prof. Daniel Valuch from CERN was very helpful, and together with Mr. Thierry Viant from ETH, these tests were conducted in a short space of time. The results were quite encouraging, with only one area of concern identified. Follow-up tests are envisaged to identify and investigate the culprit equipment. Once these follow-up tests have been conducted, some mitigation actions will be implemented.” 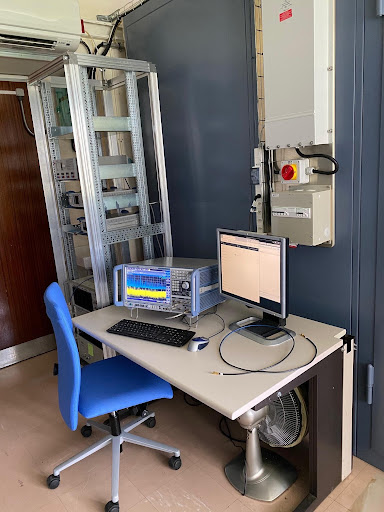 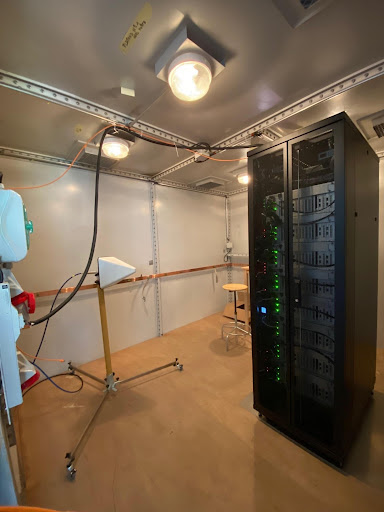 Inside of the Faraday cage. Three different antennas were used to cover the frequency range from 200 MHz to 14 GHz. Photo credit Daniel Valuch (CERN).