The Alpha Magnetic Spectrometer (AMS) installed on the International Space Station since May 2011 has measured with unprecedented precision the spectra of Neon, Magnesium and Silicon nuclei in cosmic rays.
AMS measures the spectra of cosmic rays, that is the number of particles arriving per unit surface, solid angle as a function of rigidity (momentum/charge).

As Helium, Carbon and Oxygen, Neon, Magnesium and Silicon are primary cosmic-ray nuclei produced in stars and then accelerated in supernovae explosions and released in the interstellar medium. Other cosmic-ray nuclei, as Lithium, Boron and Carbon, are instead produced by collisions of primary cosmic rays with the interstellar medium while they propagate through the Galaxy.

The newly reported AMS measurement of the spectra of Neon, Magnesium and Silicon nuclei, reveal that these three heavy primary cosmic rays exhibit an identical rigidity dependence.
Unexpectedly their spectral shape is different from the spectral shape of the lighter primary cosmic rays Helium, Carbon and Oxygen reported in a previous AMS publication. The observed difference is firmly established by a 5 sigmas effect.

These new AMS measurements have been published today May 29 2020 in Physics Review Letters. The paper has been selected as PRL Editors' Suggestion and highlighted in the journal Physics. 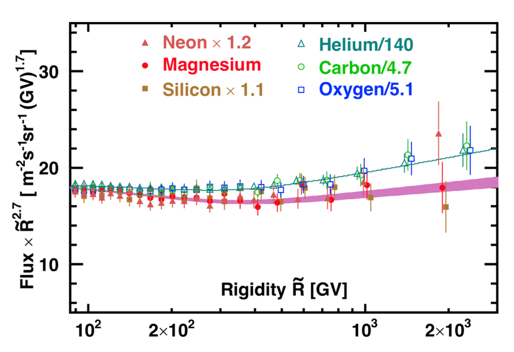