We are interested in the mutual interaction between fluid flow and seismic activity that is modulated by the state of stress of the crust. Vertical migration of deep fluids can either reduce the effective differential stress acting on geological structures leading to fault slip and/or hydrofracturing or vice-versa be triggered by seismic activity itself. An increasing number of observations highlights the sporadic occurrence in the crust of extremely rapid (days to years) vertical fluid flow separated by periods dominated by slow fluid diffusion. The fast upwelling of deep fluids is accompanied by short-lived permeability enhancements that are therefore associated with intense seismic and micro-seismic activity. These dynamics are more frequent in regions characterized by fluid pressures close to lithostatic where external factors such as distant earthquakes can alter the physical state of the crust. 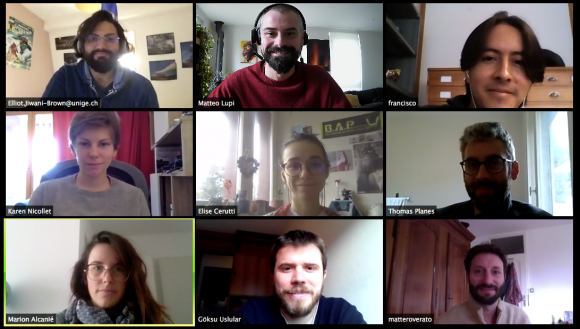 Thomas Planès (Maitre Assistant). My current research focuses on developing and testing passive seismic imaging methods for geothermal exploration. The development of geothermal energy could greatly benefit from the emergence of cost-effective subsurface exploration methods. Ambient-Noise Tomography (ANT), a passive and non-invasive seismic imaging technique, is an interesting candidate for such purpose. Using data from a temporary network of ~25 seismometers deployed in the Greater Geneva Basin (GGB), we applied surface-wave ANT to retrieve a shear-wave velocity model of the area. While such a low density of sensors allows to retrieve large-scale features of the GGB, it is insufficient for exploration purposes. The recent development of affordable, portable, and wireless seismic sensors (nodes) could help to drastically improve the resolution of ANT-based subsurface models. Within the PSIGE project, funded by the Swiss Federal Office of Energy, we are aiming to further develop and characterize ANT as an affordable and logistically-simple geothermal exploration technique. We recently deployed 210 3-component seismic nodes in the Northern canton of Aargau, Switzerland (Dec. 2020). This region sits on a large heat-flux anomaly, probably linked to the circulation of hydrothermal fluids along faults bounding a permocarboniferous trough. We are looking forward to evaluate various ANT approaches on this first test site.

Elliot Jiwani-Brown (PhD Student). My research interests include the study of volcanoes through geophysical methods. I am currently the final year of my PhD at the University of Geneva (UNIGE), working on a project applying “volcano seismology” in Costa Rica. I am primarily focussing on the Irazú and Turrialba Volcanic Complex (ITVC) and also the Costa Rican section of the Central American Volcanic Arc (CAVA). The project is part of the SNF (Swiss National Science Foundation) funded GENERATE project (GEophysical and Numerical Experiments for Rerservoir Analysis and fluid Transported Energy). This project explores the idea of geothermal reservoir stimulation and influence of seismic waves on such systems. Within this project, the study of fluid transport in the upper crust leads compares low enthalpy systems such as the Great Geneva Basin, with more high-enthalpy, “natural laboratory” examples such as the Irazú and Turrialba systems.

Marion Alcaniè (PhD Student). The aim of my study is to identify where promising areas for geothermal energy exploitation within the Great Geneva Basin are located. This project is financed by the Swiss National Science Foundation (project GENERATE) and contributes to the development of the program (Géothermies). In order to understand the relation between local geology of the Great Geneva Basin (GGB) and fluid flow in the upper crust, I am implementing several basin scale fluid flow numerical models and testing them using a specific Matlab reservoir simulation toolbox (MRST, developed by SINTEF). Designed firstly for oil and gas industry, there initially was no geothermal module existing. In collaboration with the SINTEF lab in Oslo and Marine Collignon, former member of our group, I helped implementing in Geneva new solutions for hydrothermal fluids and geothermal energy purposes.

Francisco Munoz Burbano (PhD Student). I interested in volcano-seismology and my current project investigates the seismicty of the Domo San Pedro geothermal field in Mexico. I deployed 20 broadband seismic stations to perform accurate locations and passive seismic tomographyes. The project is funded by REPIC.

Goksu Usular (visiting PhD Student). I am a visiting PhD students working across several groups of the department of Earth Sciences (VolcTectLab, PhysVolc&Risk, and PetrVolc). I am interested in Maars and I use field, petrological and geophysical methods to investigate the emplacement of monogenic cones in Cappadoce, Turkey.

Karen Nicollet (MSc Student). My project investigates the seismic activity in the Tuscan Magmatic Province, Italy, thank to a seismic network counting more than 30 broadband sensors. I am interested in seismic hazard and seismology.

Célia Barrat (MSc Student). My project combines structural geological surveying and deep electrical tomography to assess the geological structures affecting the Vulcano-Lipari volcanic system, Italy. My project is carried on with the groups of VolcTectLab, PhysVolc&Risk, and PetrVolc.