The 2003 UNESCO-SEG Metallogeny Course held at the Universidad Central de Ecuador on June 1-14, 2003, was attended by 55 participants, including 37 non-Ecuadorians (Peru, Argentina, Chile, Colombia, Mexico, Cuba, and Brazil were represented, in order of numbers that Latin American Ph.D. students currently in the United States, Canada, and Australia). Twenty-eight attendees received support from the Swiss Agency for Development and Cooperation (SDCKFPE), UNESCO, SEG and the Universidad Central. The group was a good mixture of industry (17), academia (28), and geological surveys (10).

After six days of classroom sessions in Quito, 33 participants attended a one-week field trip to the Nambija gold skarns, the Zaruma-Portovelo gold deposits (where we were host of IAMGOLD), and the Au-rich VHMS deposit of La Plata, currently owned by Sultana del Condor Minera. The field guide (http://www.unige.ch/sciences/terre/research/Groups/mineral_resources/latinometal/quito03/quito03_guide.html), including abundant graphics, is accessible at the course website.

The metallogeny course is about to undergo major changes. It will now travel around Latin America, so that training available in this part of the world will be even more extensive. Other benefits will be the access to a larger pool of lecturers as well as many new field areas to visit. In addition, there should be opportunities for increased support from companies located in each host country, not to mention support from rotating host institutions. The designated 2004 international course coordinator, Fernando Tornos (IGME, Salamanca, Spain), is in contact with several centers of economic geology in the southern part of the region. Expressions of interest in hosting the UNESCO-SEG Metallogeny Course for future years are welcome.

As coordinator of the 2003 edition, I would like to especially acknowledge the Universidad Central de Ecuador for its 22 years of hosting, in Quito, the "Curso Internacional de Postgrado en Metalogenia," supported by UNESCO (and since 1999, also by SEG), as well as all instructors, sponsors, and companies that have made the course possible. Last but not least, I would like to thank the 55 participants for the interest and enthusiasm expressed by their endurance of the very long classroom program (sessions from 8 a.m. to 7 p.m.!).

Contact addresses and further information on past and future editions of the UNESCO-SEG Metallogeny Course can be obtained from the web page, http://www.unige.ch/sciences/terre/research/Groups/mineral_resources/latinometal/latinometal.html

FiGURE 1a. UNESCO-SEG Course participants at the Universidad Central, Quito.

FiGURE 2. Crossing the Zamora River at Ramirez near Nambija on the Universidad Central 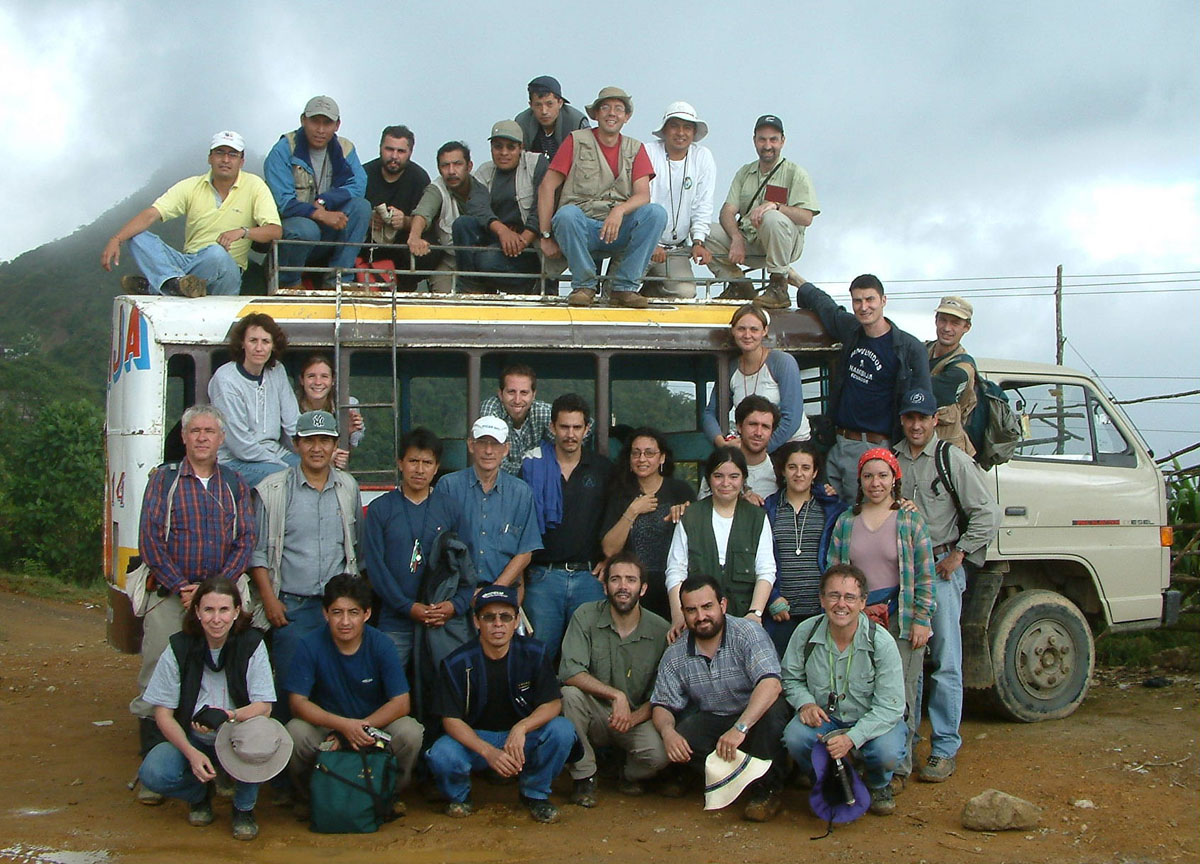 Note: Figs. 1b and 3 did not appear in SEG Newsletter.

Send comments on page to Pierre.Perroud@terre.unige.ch