The aim of this ambitious project is to investigate whether our senses, and especially our vision, are sensitive to purely quantum phenomena, like quantum interference and photon entanglement, which constitutes the basis of quantum teleportation. More precisely, we propose to study whether it is possible to create some quantum states of light that would be more efficiently detected by the light-sensitive proteins found in the photoreceptor cells (rods and cones) of the retina. Since the experiments are performed at very low intensity levels, they are completely harmless and can be carried out in vivo using standard ophthalmologic diagnostics, like electro-retinography. If these experiments are successful, this would change the paradigm of vision, which today is assumed to be insensitive to the temporal phase of the light’s electric field.

We also aim at assessing whether it is possible to “see entangled photon pairs”, by inducing two photon absorption (TPA) in the retina at very low intensity levels. Entangled photons are twin photons that have some joined characteristics that remain common regardless of their separation in space (non-locality). It has been shown that TPA is more efficient at low illumination levels with entangled photons than with classical light. This fundamental quantum characteristic should thus allow us to directly characterise the visual response to entangled photon pairs and even control this response by engineering these non-classical states of light. This increased sensitivity may also open up a possible extension of our vision to the near infrared 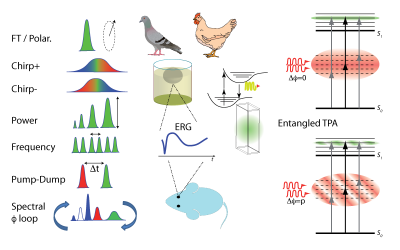