Ever since the invention of the lightning rod by Benjamin Franklin in the 18th century, mankind has become more and more invested in understanding and tame this natural phenomenon. Along with the rapid evolution of the laser technologies, the idea to develop new type of lighting protection based on high-power femtosecond lasers has emerged in recent years.


The goal of the present project is to investigate and develop a new type of lightning protection based on the use of upward lightning discharges initiated through a high repetition rate multi Terawatt laser.


The feasibility of the novel technique and the project’s prospect of success are based on recent research providing new insights into the mechanism responsible for the guiding of electrical discharges by laser filaments, on cutting-edge high power laser technology and on the availability of the uniquely suitable Säntis lightning measurement station in Northeastern Switzerland.

Passive control by lightning rods is widely used for the external protection of fixed installations.
However, there are many situations where the protected object cannot support a bulky metallic rod and an easily deployable active protection then becomes necessary. Furthermore conventional lightning rods do not protect sensitive sites from the various indirect effects of the strong EM fields that are induced by lightning strikes, such as overvoltages. Diverting lightning strikes to another location is hence a preferable solution for the protection of sensitives sites such as airports, refineries or even aircraft1,2.

The demonstration of laser-induced lightning will be done by using a high average power (1 kW), high pulse energy laser (1 J) at the Säntis lightning research site in Switzerland.
The tower at the Säntis site is struck over 100 times a year3 and hence represents an ideal location. 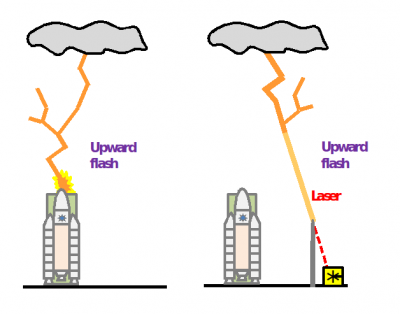 Laser Lightning rod As a protective device:
harmful lightning strikes are diverted to conventional lightning rods situated at secure location in order to protect sensitive sites such as airports, refineries or even aircraft.