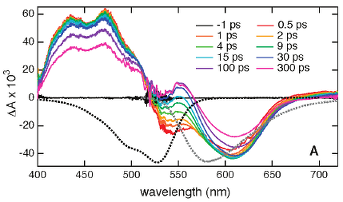 The photophysical properties of multichromophoric systems consisting of eight red or blue naphthalene diimides (NDIs) covalently attached to a p-octiphenyl scaffold, as well as a blue bichromophoric system with a biphenyl scaffold, have been investigated in detail using femtosecond time-resolved spectroscopy. The blue octachromophoric systems have been recently shown to self-assemble as supramolecular tetramers in lipid bilayer membranes and to enable generation of a transmembrane proton gradient upon photoexcitation (Bhosale, S.;Sisson, A. L.; Talukdar, P.; Fürstenberg, A.; Banerji, N.; Vauthey, E.; Bollot, G.; Mareda, J.;Röger, C.; Würthner, F.; Sakai, N.; Matile, S. Science2006, 313, 84). A strong reduction of the fluorescence quantum yield was observed when going from the single NDI units to the multichromophoric systems in methanol, the effect being even stronger in a vesicular lipid membrane. Fluorescence up-conversion measurements reveal ultrafast self-quenching in the multichromophoric systems, whereas the formation of the NDI radical anion, evidenced by transient absorption measurements, points to the occurrence of photoinduced charge separation. The location of the positive charge could not be established unambiguously from the transient absorption measurements, but energetic considerations indicate that charge separation should occur between two NDI units in the blue systems, whereas both an NDI unit and the p-octiphenyl scaffold could act as electron donor in the red system. The lifetime of the charge-separated state was found to increase from 22 to 45 ps by going from the bi- to the octachromophoric blue systems in methanol, while a 400 ps decay component was observed in the lipid membrane. This lifetime lengthening is explained in terms of charge migration that is most efficient when the octachromophoric systems are assembled as supramolecular tetramers in the lipid membrane. Furthermore, the average charge-separated state lifetime of the red system in methanol is even larger and amounts to 750 ps. This effect cannot be simply explained in terms of Marcus inverted regime as the driving force for charge recombination in the red system is only slightly larger than in the blue one. A better spatial separation of the charges in the red system stemming from the localization of the hole on the p-octiphenyl scaffold could additionally contribute to the slowing down of charge recombination.