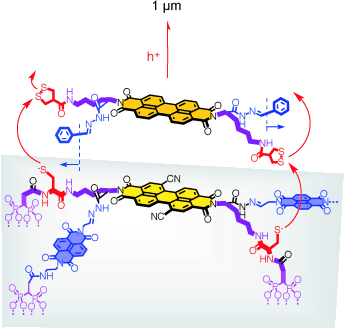 Simple stacks of perylenediimides (PDIs) grown directly on solid surfaces are an intriguing starting point for the construction of multicomponent architectures because their intrinsic activity is already very high. The ability of PDI stacks to efficiently generate photocurrent originates from the strong absorption of visible light and the efficient transport of both electrons and holes after generation with light. The objective of this study was to explore whether or not the excellent performance of these remarkably simple single-channel photosystems could be further improved in more sophisticated multicomponent architectures. We report that the directional construction of strings of anions or cations along the PDI stacks does not significantly improve their activity; that is, the intrinsic activity of PDI stacks is too high to yield ion-gated photosystems. The directional construction of electron- and hole-transporting stacks of naphthalenediimides (NDIs) and oligothiophenes along the central PDI stack did not improve photocurrent generation under standard conditions either. However, the activity of double-channel photosystems increased with increasing thickness, whereas increasing charge recombination with single-channel PDI stacks resulted in decreasing activity with increasing length. Most efficient long-distance charge transport was found with double-channel photosystems composed of PDIs and NDIs. This finding suggests that over long distances, PDI stacks transport holes better than electrons, at least under the present conditions. Triple-channel photosystems built around PDI stacks with oligothiophenes and triphenylamines were less active, presumably because hole mobility in the added channels was inferior to that in the original PDI stacks, thus promoting charge recombination.