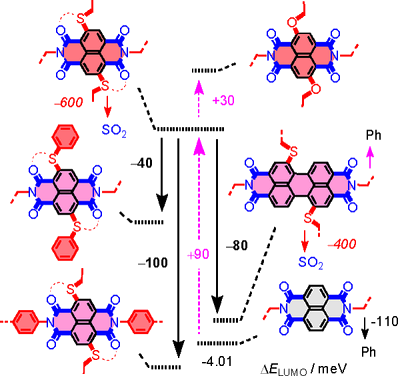 Core-substituted naphthalenediimides (NDIs) attract increasing attention to bind, transport, and transform electrons, anions, anionic intermediates, and anionic transition states, and to shine as most colorful rainbow fluorophores. The energy level of their lowest unoccupied molecular orbital (LUMO) is decisive for many of these applications. Here, differential pulse voltammetry (DPV) measurements for a consistent series of NDIs are reported to extract exact LUMO levels under identical conditions. The influence of primary and secondary substituents in the core and on the primary imides is compared with general trends for the reliable prediction of LUMO levels in functional systems. Emphasis is on sulfur redox switches in the NDI core because of their frequent use as isostructural probes for π acidity. The same sulfur redox chemistry is expanded to perylenediimides (PDIs), and LUMO engineering is discussed in a broader context, including also fullerenes, aminonaphthalimides (ANIs), and aminoperyleneimides (APIs). The result is a comprehensive reference table that graphically maps out the LUMO space covered by the leading families of electronaccepting aromatics. This graphical summary of general trends in the π-acidic space is expected to be both inspiring and quite useful in practice.