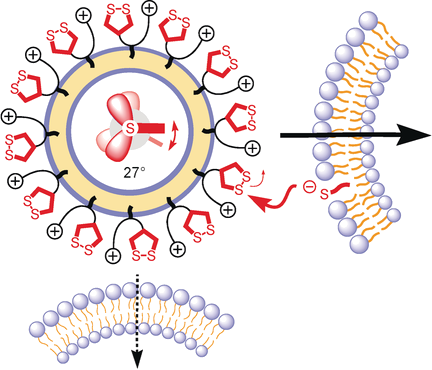 Simple cyclic disulfides under high tension mediate the uptake of giant substrates, that is, liposomes and polymersomes with diameters of up to 400 nm, into HeLa Kyoto cells. To place them at the surface of the vesicles, the strained disulfides were attached to the head-group of cationic amphiphiles. Bell-shaped dose response curves revealed self-activation of the strained amphiphiles by self-assembly into microdomains at low concentrations and self-inhibition by micelle formation at high concentrations. Poor colocalization of internalized vesicles with endosomes, lysosomes, and mitochondria indicate substantial release into the cytosol. The increasing activity with disulfide ring tension, inhibition with Ellman's reagent, and inactivity of maleimide and guanidinium controls outline a distinct mode of action that deserves further investigation and is promising for practical applications.