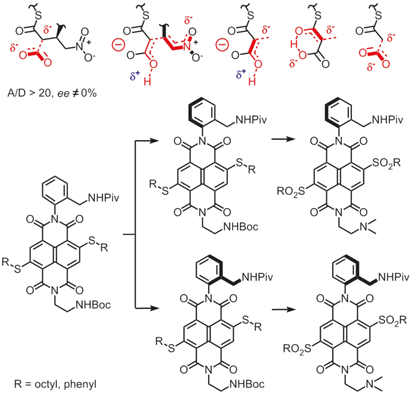 The idea of anion-π catalysis is to stabilize anionic transition states by anion-π interactions on aromatic surfaces. For asymmetric anion-π catalysis, π-acidic surfaces have been surrounded with stereogenic centers. This manuscript introduces the first anion-π catalysts that operate with axial chirality. Bifunctional catalysts with tertiary amine bases next to π-acidic naphthalenediimide planes are equipped with a bulky aromatic substituent in the imide position to produce separable atropisomers. The addition of malonic acid half thioesters to enolate acceptors is used for evaluation. In the presence of a chiral axis, the selective acceleration of the disfavored but relevant enolate addition was much better than with point chirality, and enantioselectivity could be observed for the first time for this reaction with small-molecule anion-π catalysts. Enantioselectivity increased with the π acidity of the π surface, whereas the addition of stereogenic centers around the aromatic plane did not cause further improvements. These results identify axial chirality of the active aromatic plane generated by atropisomerism as an attractive strategy for asymmetric anion-π catalysis.