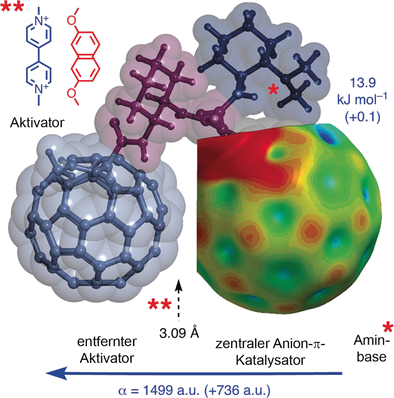 The design, synthesis and evaluation of catalytic triads composed of a central C60 fullerene with an amine base on one side and polarizability enhancers on the other side are reported. According to an enolate addition benchmark reaction, fullerene–fullerene–amine triads display the highest selectivity in anion–π catalysis observed so far, whereas NDI–fullerene–amine triads are not much better than fullerene–amine controls (NDI=naphthalenediimide). These large differences in activity are in conflict with the small differences in intrinsic π acidity, that is, LUMO energy levels and π holes on the central fullerene. However, they are in agreement with the high polarizability of fullerene–fullerene–amine triads. Activation and deactivation of the fullerene‐centered triads by intercalators and computational data on anion binding further indicate that for functional relevance, intrinsic π acidity is less important than induced π acidity, that is, the size of the oriented macrodipole of polarizable π systems that emerges only in response to the interaction with anions and anionic transition states. The resulting transformation is thus self‐induced, the anionic intermediates and transition states create their own anion–π catalyst.