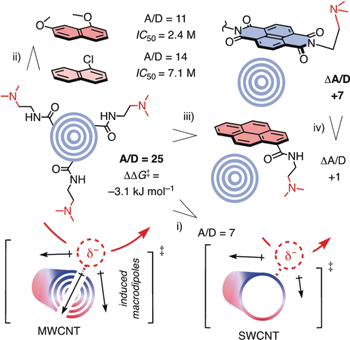 Induced π acidity from polarizability is emerging as the most effective way to stabilize anionic transition states on aromatic π surfaces, that is, anion–π catalysis. To access extreme polarizability, we propose a shift from homogeneous toward heterogeneous anion–π catalysis on higher carbon allotropes. According to benchmark enolate addition chemistry, multi-walled carbon nanotubes equipped with tertiary amine bases outperform single-walled carbon nanotubes. This is consistent with the polarizability of the former not only along but also between the tubes. Inactivation by π-basic aromatics and saturation with increasing catalyst concentration support that catalysis occurs on the π surface of the tubes. Increasing rate and selectivity of existing anion–π catalysts on the surface of unmodified nanotubes is consistent with transition-state stabilization by electron sharing into the tubes, i.e., induced anion–π interactions. On pristine tubes, anion–π catalysis is realized by non-covalent interfacing with π-basic pyrenes.