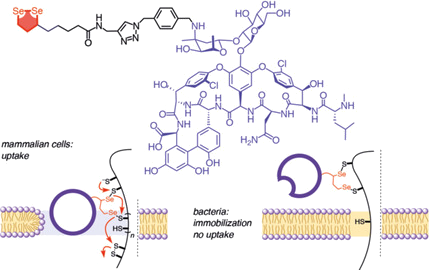 Cellular uptake mediated by cyclic oligochalcogenides (COCs) is emerging as a conceptually innovative method to penetrate mammalian cells. Their mode of action is based on dynamic covalent oligochalcogenide exchange with cellular thiols. To test thiol-mediated uptake in bacteria, five antibiotics have been equipped with up to three different COCs: One diselenolane and two dithiolanes. We found that the COCs do not activate antibiotics in Gram-negative bacteria. In Gram-positive bacteria, the COCs inactivate antibiotics that act in the cytoplasm and reduce the activity of antibiotics that act on the cell surface. These results indicate that thiol-mediated uptake operates in neither of the membranes of bacteria. COCs are likely to exchange with thiols on the inner, maybe also on the outer membrane, but do not move on. Concerning mammalian cells, the absence of a COC-mediated uptake into bacteria observed in this study disfavors trivial mechanisms, such as passive diffusion, and supports the existence of more sophisticated, so far poorly understood uptake pathways.