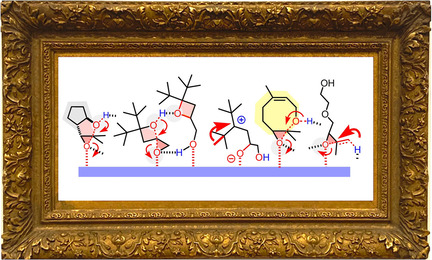 The concept of anion–π catalysis focuses on the stabilization of anionic transition states on aromatic π surfaces. Recently, we demonstrated the occurrence of epoxide-opening ether cyclizations on aromatic π surfaces. Although the reaction proceeded through unconventional mechanisms, the obtained products are the same as those from conventional Brønsted acid catalysis, and in agreement with the Baldwin selectivity rules. Different mechanisms, however, should ultimately lead to new products, a promise anion–π catalysis has been reluctant to live up to. Herein, we report non-trivial reactions that work with anion–π catalysis, but not with Brønsted acids, under comparable conditions. Namely, we show that the anion–π templated autocatalysis and epoxide opening with alcoholate–π interactions can provide access to unconventional ring chemistry. For smaller rings, anion–π catalysis affords anti-Baldwin oxolanes, 2-oxabicyclo[3.3.0]octanes, and the expansion of Baldwin oxetanes by methyl migration. For larger rings, anion–π templated autocatalysis is thought to alleviate the entropic penalty of folding to enable disfavored anti-Baldwin cyclizations into oxepanes and oxocanes.