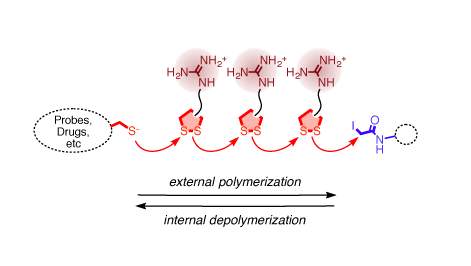 Lessons from surface-initiated polymerization are applied to grow cell-penetrating poly(disulfide)s directly on substrates of free choice. Reductive depolymerization after cellular uptake should then release the native substrates and minimize toxicity. In the presence of thiolated substrates, propagators containing a strained disulfide from asparagusic or, preferably, lipoic acid and a guanidinium cation polymerize into poly(disulfide)s in less than 5 min at room temperature at pH 7. Substrate-initiated polymerization of cationic poly(disulfide)s and their depolymerization with dithiothreitol causes the appearance and disappearance of transport activity in fluorogenic vesicles. The same process is further characterized by gel-permeation chromatography and fluorescence resonance energy transfer.