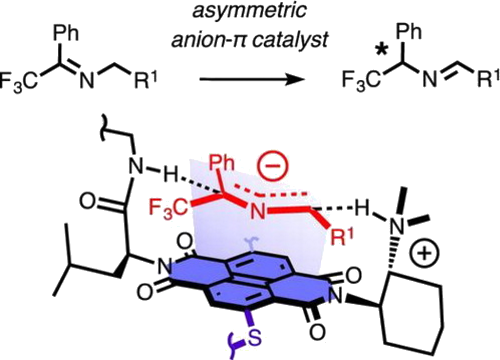 The possibility to stabilise anionic transition states on π-acidic aromatic surfaces has been explicitly demonstrated first in 2013. Since then, anion-π catalysis has been introduced to asymmetric enamine and iminium chemistry and to cascade processes, and the first anion-π enzyme has been created. Moving beyond systems that operate with nitronate-π interactions, this report adds transamination to the repertoire of anion-π catalysis. Whereas bioinspired approaches to transamination with pyridoxalphosphate appeared less obvious in this context, the base-catalyzed isomerisation of trifluoromethylimines contains suitable anionic transition states. Run on increasingly π-acidic aromatic surfaces in covalent and supramolecular trifunctional systems, we find that both rate and enantioselectivity of this reaction increase. These results support that anion-π interactions with 2-azaallyl anion intermediates catalyse the isomerisation of trifluoromethylimines by cumulative asymmetric umpolung on π-acidic surfaces.