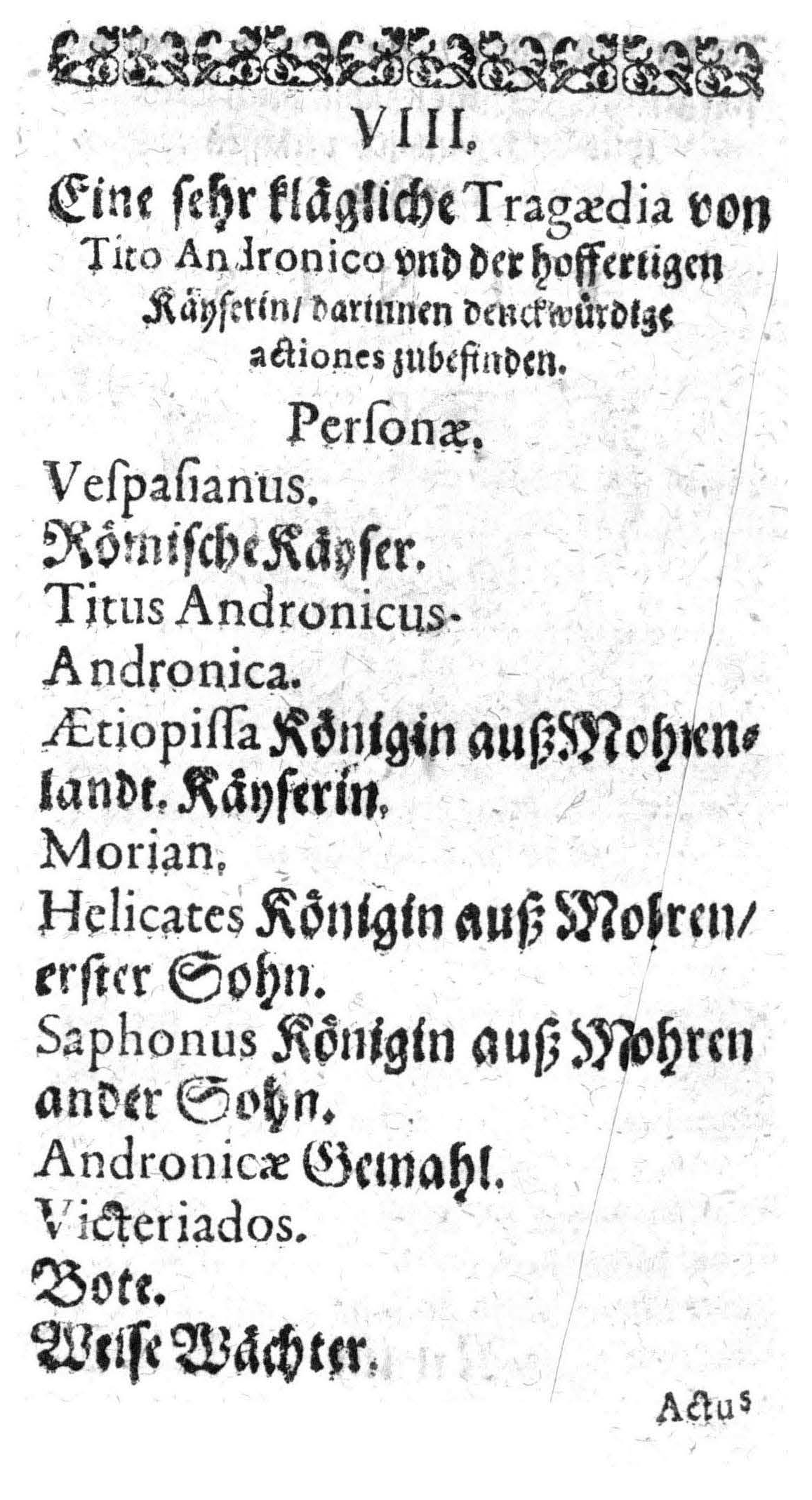 Image reproduced by permission of the University Library of Munich (shelfmark W 8 P.germ. 46).

Tito Andronico is likely to be a streamlined version of a lost English play that served as the source for Shakespeare and George Peele’s Titus Andronicus. It is short and has a smaller cast than Titus Andronicus, while differing from it in intriguing ways. Notably, the non-Roman characters in Tito are not Goths but Africans, from ‘Aethiopia’. While the protagonist’s name is recognizably a version of Titus, the other characters have entirely different names, including Aetiopissa (Tamora), Morian (Aaron), Andronica (Lavinia) and Vespasianus (Lucius). Our introduction investigates the complex question of the genesis of the various early Titus texts and their relationship to Tito – Shakespeare and Peele’s Titus Andronicus, the lost ‘Titus and Vespasian’ mentioned by the theatre manager Philip Henslowe in 1592, the English ballad, the prose History, and Jan Vos’s Dutch play Aran en Titus, of Wraak en Weerwrak (1638).

Tito Andronico appeared in 1620 in an octavo collection entitled Engelische Comedien vnd Tragedien, making of it the earliest version of a Shakespeare play to appear in a dramatic collection, three years before the First Folio. Engelische Comedien vnd Tragedien, which was probably put together by Friedrich Menius, contains two tragedies, six comedies, two ‘Pickelherring plays’ (named after the clown figure) and six ‘Singspiele’ (similar to English jigs). A second edition, published in 1624, closely follows the first. 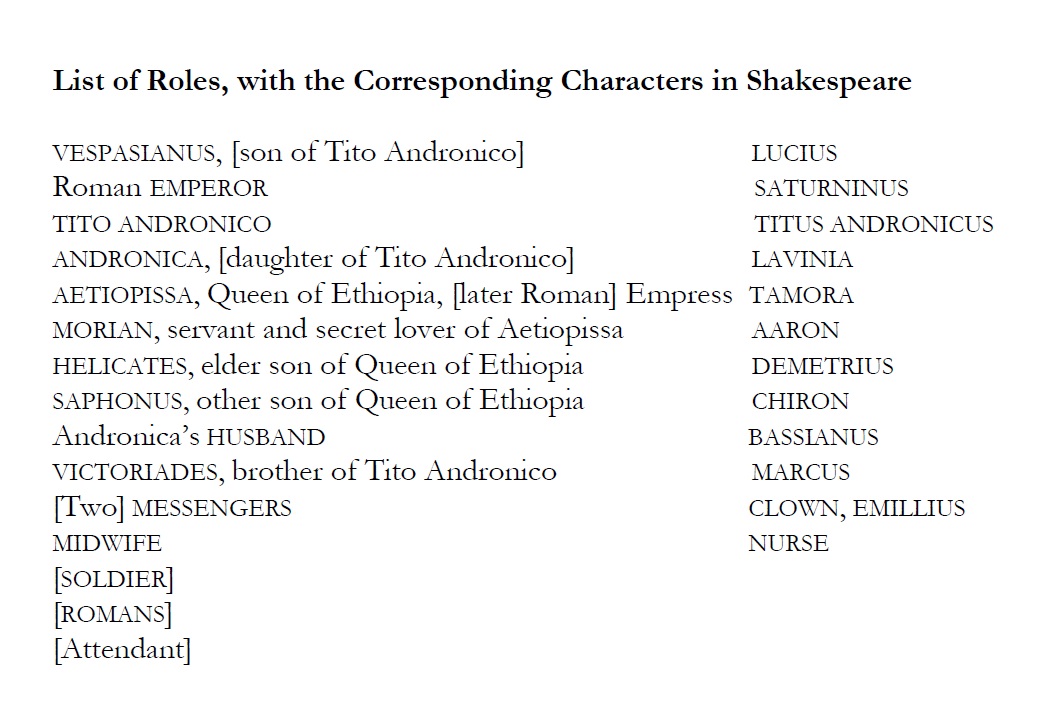 1.1 Tito is offered the Roman crown, which he rejects. He offers Andronica as a bride to the new Emperor, and presents his Ethiopian prisoners to him. Morian delivers a long soliloquy about his affair with Aetiopissa, his former military exploits, and the Roman invasion of Ethiopia.

2.1 The Emperor has rejected Andronica and declares that Aetiopissa will be his new Empress. Helicates and Saphonus are in love with Andronica and quarrel about which one of them will have her, even though she is already married to another. Morian promises to help them put Andronica’s husband out of the way so that the brothers can satiate their lust.

3.2 On the morning of the hunt Tito recounts a frightening dream from the previous night.

3.3 Aetiopissa happens upon Andronica and her husband in the forest and insults Andronica. After Andronica rebuffs her insults, Aetiopissa flies into a rage and orders her sons to kill the husband and rape Andronica.

4.1 Two of Tito’s sons have been imprisoned. Morian tells Tito that they will be spared by the Empress if he cuts off his hand. Tito obliges.

4.2 Saphonus and Helicates have raped and mutilated Andronica, whom they leave in the forest. Victoriades finds her and leads her home.

4.3 Morian returns Tito’s hand together with the heads of his sons. Vespasianus vows revenge. Victoriades brings in the ravished Andronica.

5.1 Andronica reveals the identities of her attackers by means of some sand and a stick that Vespasianus brings. Tito vows revenge and instructs Vespasianus to leave Rome and raise a vast army. Tito sends a sword and a letter to the Emperor, along with a verbal message of his enmity.

5.2 The Emperor receives Tito’s message and discovers a blade in the letter. He flies into a rage.

6.1 The Midwife searches for Morian in order to deliver his infant son to him, but is met by Saphonus and Helicates, who try to murder the baby. Morian thwarts their attempts, kills the Midwife, and leaves for Mount Thaurin, where his father lives, so that he may bring up the child in secret.

7.1 Vespasianus’s army has devastated Italy. Morian and his son are captured. Morian divulges all of Aetiopissa’s transgressions against the Andronici. Vespasianus condemns Morian to hang but spares his son.

7.2 The Emperor is frightened by Vespasianus’s ferocious campaign, but is hopeful that a disguise trick orchestrated by Aetiopissa will help them to overcome the Andronici.

7.3 Aetiopissa and her sons attempt to trick Tito into divulging his plans to them. When Aetiopissa has left, he kills the sons and promises to bake their remains into pies.

8.1 A messenger proclaims peace and invites the Emperor and Aetiopissa to a banquet at Tito’s house.

8.2 Tito’s guests arrive and the pies are served. When Aetiopissa enquires about Tito’s melancholy mood, he kills Andronica and reveals Aetiopissa’s villainy, before disclosing the contents of the pies. Tito kills Aetiopissa; the Emperor kills Tito in return before being fatally stabbed by Vespasianus. Vespasianus agrees to take the Roman crown.