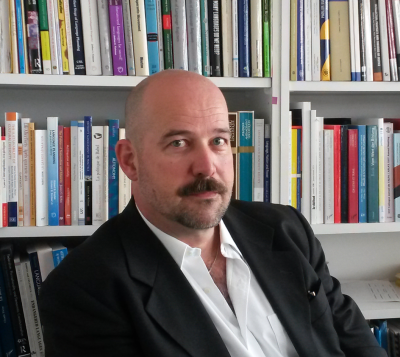 Professor François Grin (b. 1959) received a PhD in economics from the University of Geneva, before pursuing research and teaching activities at the Department of economics at the University of Montreal, Canada, and at the Department of political science at the University of Washington (Seattle, USA). From 1998 to 2001, François Grin was the Deputy director of the European Centre for Minority Issues (ECMI) in Flensburg (Germany), a research centre working on minority-majority relations across Europe. After moving back to Switzerland in 2001, François Grin served as Deputy director of Education Research Unit (SRED) of the Geneva Department of Education.
François Grin was appointed as a full professor in economics at the Faculty of Translation and Interpreting of the University of Geneva in 2003, where he heads the “Observatoire Économie―Langues―Formation” (Observatory on Economy, Languages and Training). He also teaches courses in the management of ethnic, linguistic and cultural diversity as a visiting professor, at the Faculty of communication sciences of the University of Italian Switzerland (USI) since 2001 (he has taught similar courses in a variety of institutions and programmes, including the Graduate Institute for International and Development Studies , Geneva.
Prof. Grin has specialised in language economics, education economics, and the evaluation of public policies in those fields. He is the author of over 200 articles, chapters of books, monographs and research reports. He sits on the board of academic journals such as Language Problems and Language Planning, Language Policy, Journal of Ethnopolitics and Minority Issues in Europe, Critical Inquiry in Language Studies, and Français & Société , as well as on the board of book series on language policy issues at Multilingual Matters and John Benjamins. He has worked as a consultant or advisor for national or regional authorities in Switzerland, France, Spain, Ireland and New Zealand), as well as for international organizations (European Commission, Council of Europe, World Bank Institute, Francophone University Agency) or NGOs. He was the co-leader of the European Commission’s evaluation project on Support for Minority Languages in Europe, and directed several large-scale research projects funded by the Swiss National Science Foundation on language and education issues. He was also the Deputy coordinator of the DYLAN integrated project (“Dynamics of language and management of diversity”) funded by the European Commission under Framework Programme 6 (2006-2011) and the excellence network SUS.DIV (“Sustainable Diversity”). He is currently the leader of the MIME project (“Mobility and Inclusion in Multilingual Europe”, 2014-2018) under Framework Programme 7, coordinating 22 institutions in 16 European countries. François Grin is currently president of the Délégation à la langue française de Suisse romande (DLF). He was made a Knight (2012) and then an Officer (2019) of the Order of Arts and Letters (France). He is a member of the Research Group Economics and Language (REAL).