Welcome to the Faculty of Law

The University of Geneva was founded by Jean Calvin in 1559 and stands out as one of the 100 best universities in the world. It has always attracted both students from Switzerland and from many other countries in the world. It is the ideal place for discovering new horizons, new people, and participating in an internationally-minded community. At least 40% of our students come from foreign countries. In addition, combined with the Graduate Institute of International and Development Studies ('The Graduate Institute Geneva'), the Geneva academic institutions house no less than 25 professors specialized in international law (private, public or criminal).

The University of Geneva is a member of the League of European Research Universities, which includes academic institutions such as Amsterdam, Cambridge, Heidelberg, Helsinki and Milan, and is also part of the Strategic Alliance of Research Faculties of Law, together with twelve other prestigious European law schools. The Faculty of Law also has an ongoing student and professor exchange program with Harvard Law School and Melbourne Law School.

The former students and alumni of the University and the Graduate Institute include high-profile personalities such as M. Manuel Barroso (current president of the European Commission), M. Kofi Annan (seventh Secretary General of the United Nations), Ms Carla del Ponte (chief prosecutor of two United Nations international criminal law tribunals), and M. Hans Gert Pöttering (president of the European Parliament from 2007 to 2009).

The Faculty of Law hosts several research centers, including the Centre for Banking and Financial Law, the Centre for European Legal Studies and the Art Law Centre, and offers a wide variety of academic courses covering all areas of law, with a strong focus on international and comparative law. Benefiting from its strategic location in one of the world’s main arbitration venues with a long tradition in dispute settlement, the Faculty of Law has developed a recognized area of expertise in international arbitration and alternative dispute resolution incorporating research projects, conferences and seminars.

The Law Faculty of the University of Geneva is located on the left bank of the river Rhone, just a 10 minute walk from the historic city centre. For information on current events (in English and French), go to the homepage of the Faculty of Law (in French). 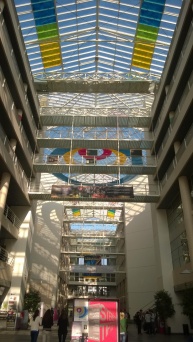