In April 2018, a team composed of scientists and engineers from the Geneva Observatory and ESO were at the La Silla Observatory to commission HELIOS (HARPS Experiment for Light Integrated Over the Sun) [1]. This novel device was built under an agreement between ESO, the University of Geneva and the Centro de Astrofísica da Universidade do Porto [2].

HELIOS is a solar telescope feeding the HARPS (High Accuracy Radial velocity Planet Searcher) instrument, which is attached to the ESO 3.6-metre telescope. HARPS is one of the most powerful planet hunters in existence and spends most nights monitoring stars for minute signals that indicate the presence of an exoplanet. HARPS has unparalleled accuracy and is regularly generating results that will present fresh challenges for future telescopes such as ESO’s Extremely Large Telescope.

HELIOS will be able to feed sunlight into HARPS to achieve very high precision spectroscopy of the Sun for several hours per day [3]. As well as learning about the Sun itself, and in particular improving our understanding of stellar activity (which is the main limitation in the detection of Earth-twins using HARPS), the HELIOS project will lead to an improvement of exoplanet detection techniques.

The large volumes of data from HELIOS will also allow very detailed investigations into the different HARPS instrumental effects and may lead to improvements in the precision of HARPS itself. This information could be transferred and applied to ESPRESSO (Echelle SPectrograph for Rocky Exoplanet and Stable Spectroscopic Observations), which is the successor to HARPS and is attached to ESO’s Very Large Telescope.

The HELIOS project will run until the end of 2022.

[3] The HELIOS observing facility consists of a lens that focuses an image of the Sun into an integrating sphere. Light exits the sphere through a 30-metre optical fibre connected to the HARPS calibration unit. The whole setup is enclosed in a weather-resistant and waterproof box topped by a plexiglass dome. 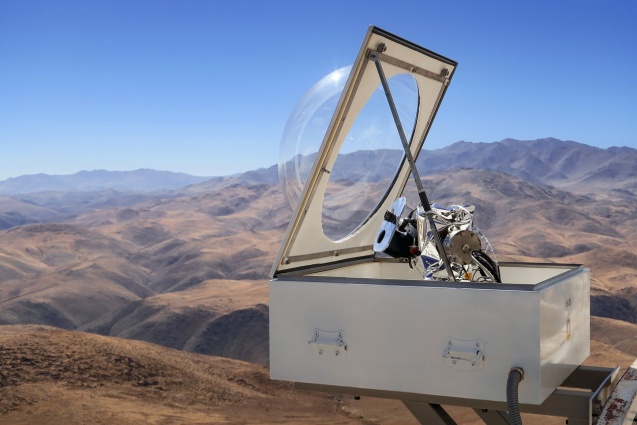 HELIOS is an instrument that was installed in April 2018 to feed sunlight via fibre optics to the HARPS (High Accuracy Radial velocity Planet Searcher) spectrograph.

This picture shows the HELIOS solar telescope attached to the catwalk of the ESO 3.6-metre telescope at La Silla.