On October 6  1995, Michel Mayor, professor at the Observatoire de la Faculté des sciences de l’Université de Genève (UNIGE), and his PhD student Didier Queloz revolutionnised the world of astrophysics with the announcement of the discovery of the first planet outside our Solar system. Named 51 Pegasi b, this very first exoplanet dropped a bomb among the astrophysicists. Since then, the domain has been expanding and the planets found amount today to more than 4'000, still counting.

Artist's view of 51 Peg b, and the radial velocity curve that lead to its detection.

Their work is today honoured with the 2019 Physics Nobel prize. They share this outstanding award with James Peebles, emeritus professor  at the University of Princeton, USA.

24 years ago, Michel Mayor and Didier Queloz were attending a scientific conference in Florence and announced the discovery of the first planet outside our Solar system: 51 Pegasi b. «Nobody knew wether exoplanets existed or not, recalls Michel Mayor. High rank astronomers were looking for them since years… in vain!» In deed, technology was not yet ripe for such a discovery then. Only spectrograph Elodie (alias super-Coravel), commissionned in 1993 on a 2m telescope in Haute-Provence proved able to capture the signal. Thanks to the high precision of the measures (15m/s), Michel Mayor and Didier Queloz find in 1994 the signal of an object orbiting its star in 4,2 days. «We were so excited thinking that we might have found an exoplanet! tells Didier Queloz. But we had first to confirm our observations before revealing it.» In July 1995, the pair of astrophysicists have discarded all doubts: they really have discovered the first exoplanet!

«This discovery is the most exciting of our life, and receiving a Nobel prize for it, it's really extraordinary», tell Michel Mayor et Didier Queloz with emotion. 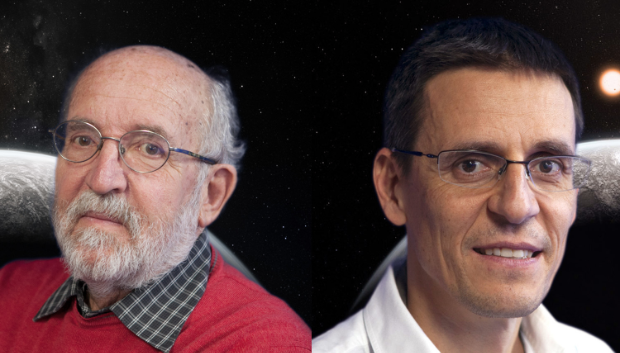 Today's instruments – like the CHEOPS satellite, or the new spectrograph ESPRESSO build in Geneva and installed on one of the ESO's Very Large Telescope in Chile – open new perspectives in the hunt for exoplanets. The point now is to analyse closely these planetary systems, especially their origin, evolution, and physical and chemical characteristics. Such a task is undertaken by the National Research Pole (PRN) PlanetS, that gather the centres of excellence devoted to the study of exoplanets, among which UNIGE is a pillar.

These studies cover the silent hope to detect signs of extraterrestrial life. The gigantic theoretical number of planetary systems (estimated to be around tens of billions) allow the astrophysicists to believe in the existence of other worlds evolving into life favourable conditions. If we consider that the organisms evolve as on Earth, the presence of carbon dioxyde and water might indicate a habitable planet. If ozone is detected in the atmosphere, it might be considered as a proof that it is in deed inhabited. However, this is only a scientific hypothesis...

See the dedicated page on the Nobel prize website