While the English version of our programme only started in autumn 2014, the French version ‘CDT’ has been successfully offered since 2000. Approximately 1100 students have obtained the certificate since its inception. Here are some impressions of the programme by some of its alumni:

To study international law in Geneva was surely the best decision I have taken during my university time. The high quality of teaching, the variety of courses offered and fellow students from all over the world made this a unique experience. The CDT/CTL program can also help open doors in the professional field. Personally, I was able to complete an internship at the European Court of Justice through my participation in the European Law Moot Court in the team of the University of Geneva. I can thus only recommend the CDT/CTL to anyone interested in working in the field of international law.

The range of topics taught by professors, who all share a practical background in their field of research, demonstrated very well how international law is distinctively linked and intertwined with the non-legal matters it serves to regulate. This approach always revealed the nature of the law in action and the institutions involved in it, instead of what most of us were used to: law in the books. I very much valued the teaching staff’s commitment to their students and the interaction and open discussion during lectures.

"Studying international and comparative law at the university of Geneva was a wonderful experience for me. Thanks to my studies in Geneva, I now have a job in Japan that makes me quite pleased. I work as a legal editor for a Japanese international law firm.  And, I will begin as an adjunct professor at a nearby university in Tokyo next semester. […] I like the job because I was allowed to immediately join teams working on large cases (in the WTO and otherwise). The lawyers in charge requested that I be assigned to them because they saw that I had attended the University of Geneva!"

Both the range of subjects covered by the law lectures and the teaching in Geneva were excellent. I particularly enjoyed the Comparative Law course; you won't get any closer to comparative law than reading the respective provisions and court decisions of different jurisdictions yourself, comparing them, and questioning the solution of your own jurisdiction. There were even certain legal solutions in my own jurisdiction (German law) which I only understood after taking this class.

I studied with an extraordinary number of kind and motivated students from all over the world. This brought with it the advantage that in class and in private discussion amongst students, we learned about different legal systems even beyond the subjects taught by the professors. Furthermore, every one of us built up an international network of diverse legal thinkers which we can take advantage of when researching in the area of comparative law – whether in practice or academia. Lastly, German students may be interested in getting involved with the ‘Genf Gesellschaft’, which organizes a host of must-do events.

"This past semester with the Certificate in Transnational Law program has been a tremendously positive experience! I was very impressed by the number and variety of international law classes offered at the University of Geneva. The option to cross-register at the Graduate Institute of International and Development Studies is an added benefit that I have taken advantage of. The CTL may well be one of the most useful exchange opportunities available to law students interested in expanding their horizons beyond domestic jurisprudence.”

"Participating in the CTL programme at the University of Geneva placed me at the crossroads of common law and civil law in class. The amazingly vivid discussions between students and professors from all over the globe outlined the commonalities and differences between jurisdictions throughout the world. […] The very international study environment at the University of Geneva provides a great opportunity to sharpen one's understanding of both foreign and one’s own national law. Coming from a German civil law background, I was impressed by the quality of teaching and by my fellow students […]."

"I had a wonderful time in the CTL/CDT program this past term. I came on exchange from the University of Toronto. I was very impressed by the course offerings, the quality of teaching, and the diverse and vibrant group of students. Coming from an anglophone common law background, I challenged myself by taking courses in French and about the civil law, and I am so glad I did. It was an excellent capstone on my legal education to engage in comparative law – both in class and through learning from my colleagues from around the world. I have been speaking highly about the CTL/CDT program to my colleagues and professors back in Toronto. I look forward to opportunities to stay in touch through the CTL/CDT network."

"I would definitely recommend studying in Geneva for anyone who is interested in international law. The breadth of international courses available is impressive, and as an extremely international city, Geneva is a fitting setting for those studies. For instance, there’s just something very cool about taking an international trade law class in the home city of the WTO – in fact, Professor Marceau, who is one of the top lawyers at the WTO, even held class at the headquarters one day, and we all sat at the delegates’ seats in the big hall. All in all, it was a great semester for me, and I’d be happy to talk to anyone who is wondering about doing the program."

"The Certificate in Transnational Law has been an essential element in the beginning of my international career. The possibility to tailor the program has allowed me to delve into both public and private international law studies. Afterwards, I have been in a position to complete an internship in the private sector (Lalive Avocats), as well as in an international organization (United Nations High Commissioner for Human Rights). I would recommend the CTL to anyone wishing to be professionally involved in international legal practice."

“The quality of my professors and classmates was outstanding. […] The depth of the issues we addressed in courses was challenging and satisfying even from a graduate student's perspective. […] By the time I was finished, I felt like I really had learned useful law that would make me feel comfortable operating in a transnational context – whether for a client, doing research, or making policy.

I was never aware of what a cosmopolitan place the University of Geneva is before I started there! In our Certificate class, I don't think there were more than five or six students from any one country. And they came from all over the word, not just Western Europe. Each student had the honor (and responsibility!) of being the expert on his or her national law, and offering a unique perspective on the legal questions at issue. We never ceased to be amazed at the fact that such different legal rules could, at the same time in different countries, be assumed to be the only reasonable rule to follow! We learned as much from each other as we did from our professors, who were themselves quite an international crowd as well!

I strongly urge law students to take the challenge and earn the Certificate of Transnational Law. When we earn our degrees, we will begin working in a very small world peopled with very diverse legal thinkers. The day is long past when lawyers can hide behind their national boundaries from foreign laws, foreign regulation, and foreign legal philosophy. The globalization of the economy and of the marketplace of ideas has seen to that. How better to prepare yourself for this profession than by reaching out while you are a student and making the contacts and exploring the ideas that you will use for the rest of your international career?"

"The service offered to exchange students by the university is fantastic. Completing the necessary paperwork for enrolling at Geneva was relatively simple, and before I arrived I was sent a very useful booklet which contained all the information I needed to fulfill Swiss administrative procedures as well as about life in Geneva. I was very happy with the level of care shown to me as an exchange student. Once I arrived in Switzerland, the welcome we were given helped us to adjust to life in a foreign country as quickly as possible. […]

Taking the CDT diploma has really opened my eyes to global possibilities for today's lawyers, and shown me a fuller picture of law, which crosses not only borders but also national legal reasoning. There is so much more to learn, explore and work with than the law of just one country! The central CDT course [Comparative Methodology: Contract Law], is fascinating as well as useful, as it helped me to break away from the logic of the national law that I had been learning, and realise that other countries can come up with totally unexpected legal solutions that function equally well, or even better! The course taught me to evaluate laws in relation to those of other countries, rather than within a national system, which has given me a much wider perspective and allowed me to think more flexibly about law as a whole. For a student coming from a common law country, being able to learn how civil legal systems work was an added bonus.

There are many other optional courses available […]. I mixed and matched between them and learned things I would never have otherwise been able to. Having such flexibility is brilliant, as you can study the things you really enjoy and find interesting. Most areas were entirely new to me, but the depth of the topics covered meant that I could learn a lot about the subjects I chose.

I believe that taking the CDT course can also open up various possibilities for students to work internationally. Geneva is home to so many NGOs that it is the perfect place in which to study international law. […] It is worth trying to apply for an internship with an organisation such as the UN during your stay. In classes there is often interaction between the students and the Professor. There are also opportunities to ask questions before, after or during each class. In addition, students can contact the Professors' assistants, who act as a bridge between the students and Professor. The atmosphere of the university is welcoming and relatively informal.

I would recommend taking the CDT course to anyone who is interested in international law, as there are a huge number of courses available and level of teaching is absolutely excellent. I would also recommend it to anyone who is interested in law from a more theoretical perspective, as gaining a wider view of law is very interesting and allows you to look at what you have learnt so far in a different way. Taking the CDT diploma meant that I was studying with motivated people from all over the world, and I hope that some of the friends I made on the course will be friends for life." 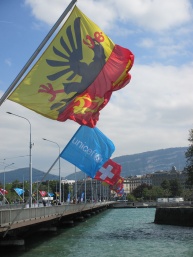