While studying two exoplanets in a bright nearby star system, the CHEOPS satellite has unexpectedly spotted the system’s third known planet crossing the face of the star. This transit reveals exciting details about a rare planet “with no known equivalent”, as the scientific team led by the Universities of Geneva and Bern, and members of the National Center of Competence in Research PlanetS, point out. 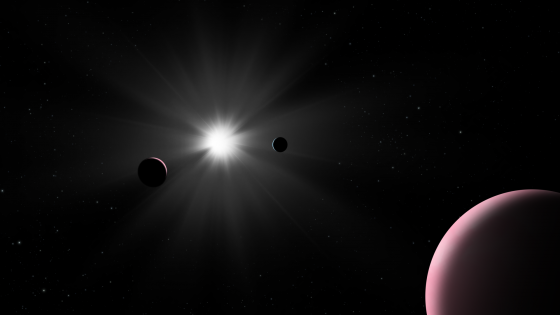 Photobombs – when something or someone unexpectedly enters a camera’s field of sight during the taking of a photograph – happen every day. Sometimes it is a friend, other times a stranger or perhaps a bird. Rarely, however, is it a whole planet. Yet, this is exactly what happened while CHEOPS, the Swiss-led space telescope, was taking pictures of a planetary system 50 light-years away.

The planetary system is located in the constellation Lupus (latin for Wolf), around a star called Nu2 Lupi, visible to the naked eye (but not from Switzerland). In 2019, Swiss astronomers announced the detection of three exoplanets around this bright, Sun-like star. The three exoplanets have masses between those of Earth and Neptune (17 times the Earth) and take 12, 28 and 107 days to circle their parent star. “What makes these exoplanets really outstanding is that we can see them passing just in front of their star; they’re said to ‘transit’”, says Yann Alibert, professor of astrophysics at the University of Bern and co-author of the study which has been published in Nature Astronomy. “We knew that already for the two inner planets, which led us to point CHEOPS to the system in the first place. However, the third planet is quite far away from the star, no one was expected to see its transit!”, Alibert adds. In fact, the farther away the planet is from its star, the less likely it is to transit.

This proved a game changer, as it is the first time an exoplanet with a revolution period of over 100 days – which corresponds to a distance from the star somewhere between that of Mercury and Venus from the Sun – has been spotted transiting a star that is bright enough to be visible to the naked eye.

“Due to its relatively long period, the amount of stellar radiation reaching the planet is mild in comparison to many other discovered exoplanets. The less radiation a planet receives, the less it changes over time. Therefore, a planet with a long period could have retained more information about its origin”, says David Ehrenreich, professor at the University of Geneva and mission scientist of CHEOPS, who co-signed the study. But so far, the few such exoplanets astronomers had found orbited faint stars. In other words: little of their light reaches Earth and therefore makes them difficult to study. Not this time: “Since its bright host star is quite close to us, it is easier to study. This makes it a golden target for future study with no known equivalent”, Ehrenreich adds.

Further insights from other telescopes

The high-precision measurements of CHEOPS reveal the third planet, called nu2 Lupi d, to be about 2.5 times the size of Earth and almost 9 times its mass. By combining these measurements with archival data from other observatories and numerical models developed by the University of Bern, Laetitia Delrez, a visiting researcher at the University of Geneva and lead-author of the study, was able to accurately characterize the density and composition the planet and its neighbors. “The innermost planet is mainly rocky, while the outer two appear to be enshrouded in envelopes of hydrogen and helium gases beneath which they hold large amounts of water”, Delrez explains. Far more water, in fact, than the Earth has: a quarter of each planet’s mass is made up of water, compared to less than 0.1% for Earth. This water, however, is not liquid, instead taking the form of high-pressure ice or high-temperature steam, making the planets uninhabitable. But these insights could only be the beginning.

“Now that we discovered that all three planets transit and have precisely measured their properties, the next step is to study them with bigger and more powerful instruments than CHEOPS, like the Hubble Space Telescope or its successor, the James Webb Space Telescope. They could reveal further details, such as the composition of the atmosphere” says Ehrenreich. Given its overall properties and orbit, planet d is going to become the poster-child of exoplanets with a mild-temperature atmosphere around a star similar to the Sun.

The CHEOPS mission (CHaracterising ExOPlanet Satellite) is the first of ESA’s newly created “S-class missions” – small-class missions with an ESA budget much smaller than that of large- and medium-size missions, and a shorter timespan from project inception to launch.

CHEOPS is dedicated to characterizing the transits of exoplanets. It measures the changes in the brightness of a star when a planet passes in front of that star. This measured value allows the size of the planet to be derived, and for its density to be determined on the basis of existing data. This provides important information on these planets – for example, whether they are predominantly rocky, are composed of gases, or if they have deep oceans. This, in turn, is an important step in determining whether a planet has conditions that are hospitable to life.

CHEOPS was developed as part of a partnership between the European Space Agency (ESA) and Switzerland. Under the leadership of the University of Bern and ESA, a consortium of more than a hundred scientists and engineers from eleven European states was involved in constructing the satellite over five years.

CHEOPS began its journey into space on Wednesday, December 18, 2019 on board a Soyuz Fregat rocket from the European spaceport in Kourou, French Guiana. Since then, it has been orbiting the Earth on a polar orbit in roughly an hour and a half at an altitude of 700 kilometers following the terminator.

The Swiss Confederation participates in the CHEOPS telescope within the PRODEX programme (PROgramme de Développement d'EXpériences scientifiques) of the European Space Agency ESA. Through this programme, national contributions for science missions can be developed and built by project teams from research and industry. This transfer of knowledge and technology between science and industry ultimately also gives Switzerland a structural competitive advantage as a business location – and enables technologies, processes and products to flow into other markets and thus generate added value for our economy.

CHEOPS provides crucial information on the size, shape, formation and evolution of known exoplanets. The installation of the "Science Operation Center" of the CHEOPS mission in Geneva, under the supervision of two professors from the UNIGE Astronomy Department, is a logical continuation of the history of research in the field of exoplanets, since it is here that the first was discovered in 1995 by Michel Mayor and Didier Queloz, winners of the 2019 Nobel Prize in Physics. This discovery has enabled the Astronomy Department of the University of Geneva to be at the forefront of research in the field, with the construction and installation of HARPS on the ESO's 3.6m telescope at La Silla in 2003, a spectrograph that remained the most efficient in the world for two decades to determine the mass of exoplanets. However, last year HARPS was surpassed by ESPRESSO, another spectrograph built in Geneva and installed on the VLT in Paranal.

CHEOPS is therefore the result of two national expertises, on the one hand the space know-how of the University of Bern with the collaboration of its Geneva counterpart and on the other hand the ground experience of the University of Geneva supported by its colleague in the Swiss capital. Two scientific and technical competences that have also made it possible to create the National Center of Competence in Research (NCCR) PlanetS.