The first stars in the Universe are extreme objects. Extreme in their composition: they are made of material having been processed only by the Big Bang nucleosynthesis, and having a content in dark matter likely very different from the one of the present-day stars. Extreme in their properties: one of the most important properties is their mass that might reach values as high as even 100 000 solar masses (supermassive black-hole seeds). Their properties may differ from the today massive star populations also by their likely fast axial spins, the processes of mass loss, their magnetic fields, multiplicity. Extreme in their physics: born in over densities made mainly by dark matter, the physics of candidate dark matter particles may have a significant effect on their evolution and produce what has been called dark or frozen stars, i.e. stars sustained by dark-matter particle annihilation.
The aim of STAREX is to determine which observable features can be used to constrain the composition (baryonic and dark matter), the properties(masses, rotation, magnetic field, multiplicity) and the physics of the first stars in the Universe. These observables will be collected by present-day and future facilities as, for instance, the JWST, ELT, adLIGO, VIRGO, LISA and are linked to ionising fluxes, nucleosynthesis, radiation of both stellar populations and transient events, and gravitational waves. STAREX will explore new physical processes, build and use new numerical tools, provide observables that will account together for a sophisticated description of the physics of individual stars, single or in binary systems, and for the dynamics of the stars in the first stellar clusters. STAREX is at the crossroad of topics such as stellar physics, nucleosynthesis, hydrodynamics, evolution of galaxies, and will potentially engender ground-braking consequences for observational cosmology, astrophysics and even fundamental physics (fluid dynamics, dark matter properties). 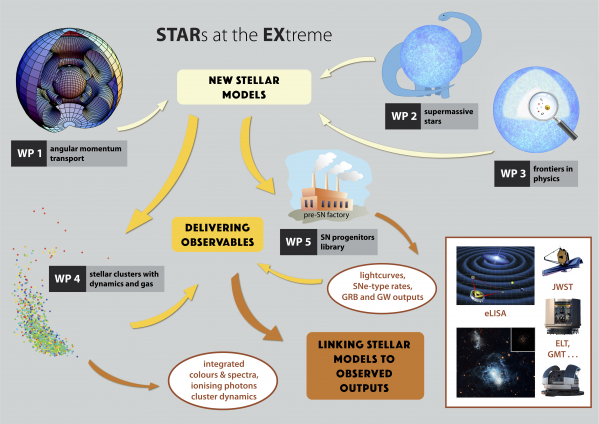