IceCube is a unique telescope located at the South Pole, a unique place. Most optical telescopes look at photons, but IceCube looks for evidence of astrophysical neutrinos, reaching us from cosmological distances. Neutrinos are unique probes to reveal the origin of cosmic rays, continuously striking the Earth with an incommensurable amount of energy. Where do cosmic rays come from? How can they be accelerated so efficiently?

In IceCube, we drill holes, 2.5 km deep, and look at the most remote parts of the universe through 5000 "eyes" embedded in the ice that we call Digital Optical Modules. The optical modules comprise the Photomultiplier tubes (PMTs) and their electronics.  PMTs are very sensitive light sensors. When a neutrino passes through the Earth, it interacts with the nuclei to emit a muon, which, traveling at a speed higher than light when in ice, emits a cone of blue light called the Cherenkov light. Such a faint light signal is detected by the PMTs, regularly distributed in IceCube volume. The muon direction, and consequently that of the parent neutrino can thus be reconstructed via the amplitude and the timing of the recorded signals. An animation of the detection principle is shown here: eventAnimation_black_lg.m4v.

After decades of an intensive quest for astrophysical neutrinos, the IceCube Collaboration reported the discovery of an astrophysical neutrino flux emerging above the much more numerous atmospheric neutrinos. After this giant step in the field of astroparticle physics, however, the question about the origin of this extraterrestrial neutrino flux is still open. "IceCubers" today are working on sophisticated analyses methods to reveal the sources of these most elusive particles.

For more information about the IceCube adventure in the Antarctic, visit the image and video gallery available here. IceCube is also a project very concerned on Gender as you can tell from Tessa's interview. 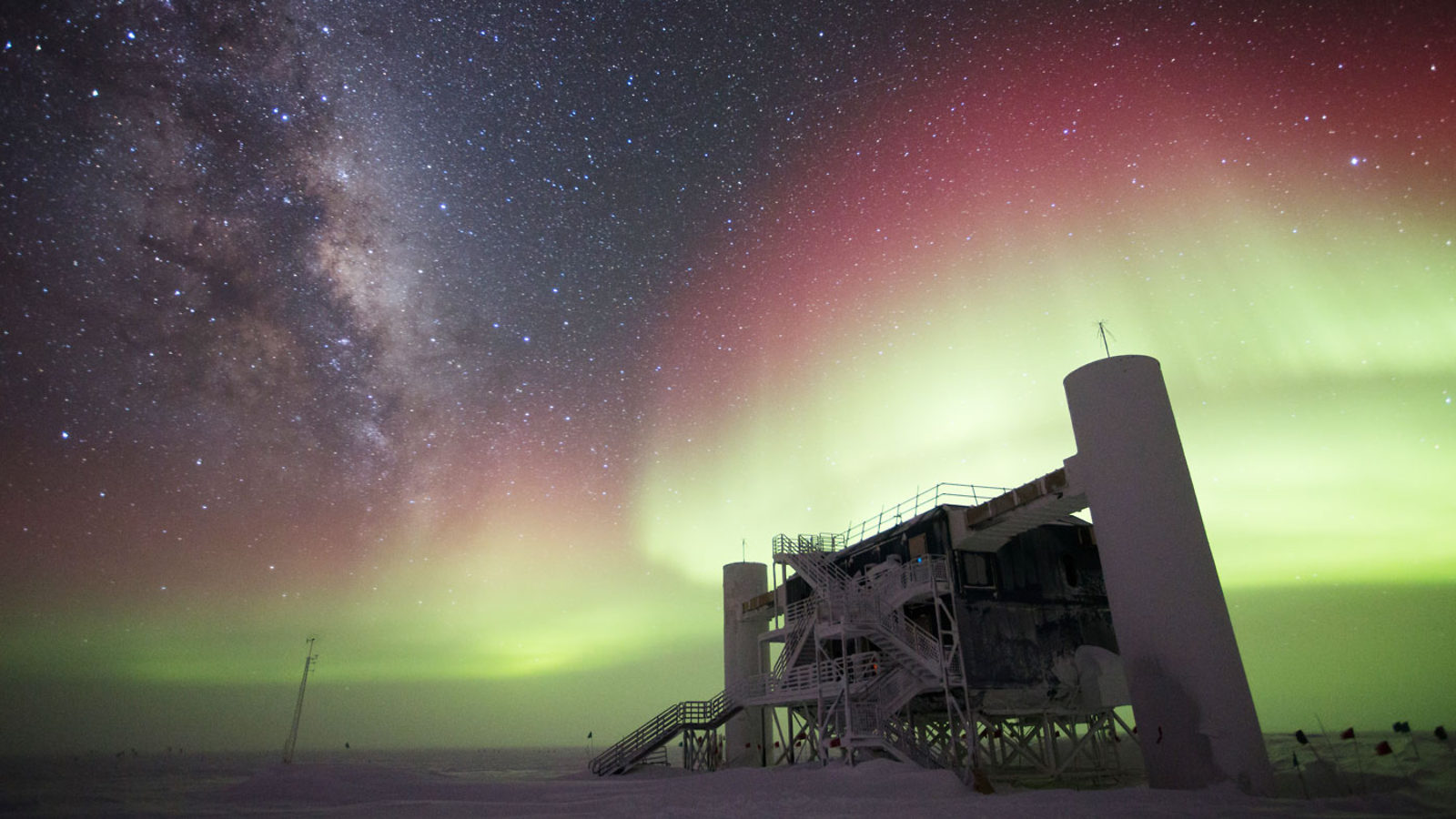 Neutrinos are nearly massless particles that come from a variety of sources. They come from the Sun, radioactive decays, cosmic rays, and violent events in the Galaxy such as exploding stars. High energy neutrinos from a variety of potential astrophysical candidates, within our own Galaxy, or of extra-galactic origin are expected. However, due to the very small interaction cross-section, only a few events are expected per year, even in a detector as large as IceCube. The challenge in detecting neutrinos with IceCube resides in discriminating astrophysical from atmospheric neutrinos. Although these limitations, IceCubers have recently analysed 10 years of data and found out a significant excess of events (3.3σ) from some sources in the sky (https://journals.aps.org/prl/abstract/10.1103/PhysRevLett.124.051103).

At lower energies (as low as 10 GeV), the identity of dark matter, and the ability of neutrinos to oscillate, or change type are also explored with DeepCore, a part of the IceCube detector equipped with a much denser instrumentation. 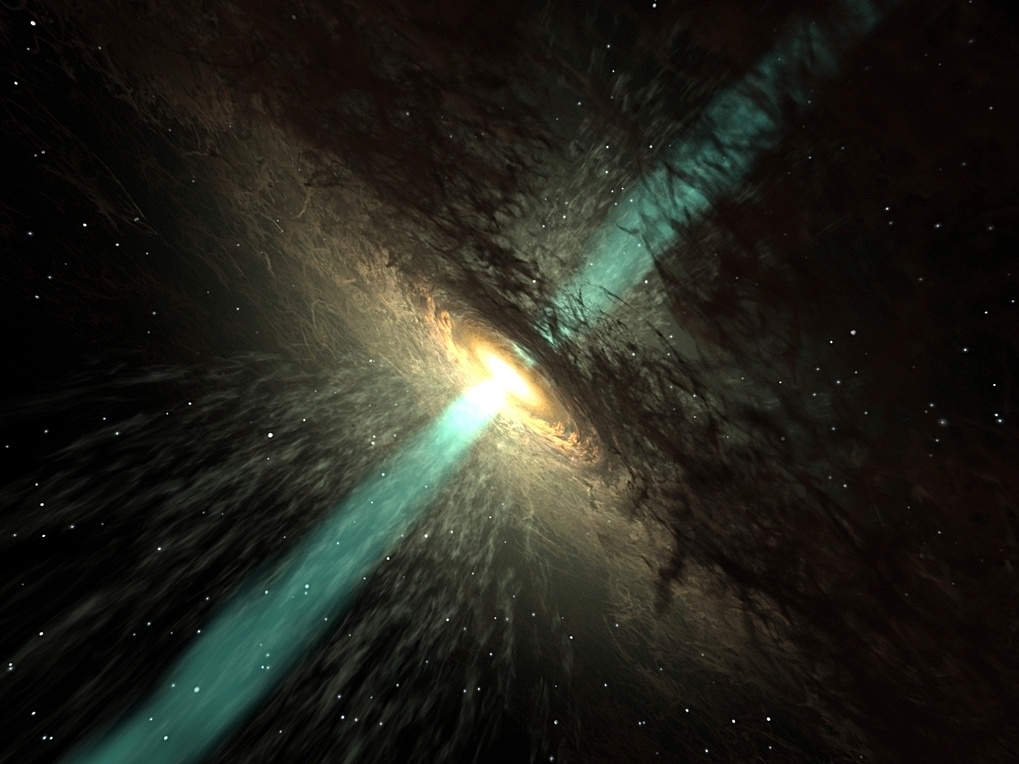 Artist's impression of a quasar; a super-massive black hole in the centre is being fed by a disc of gas and dust, producing collimated jets of ejected material moving at nearly the speed of light. Illustration credit: © Wolfgang Steffen, Institute for Astronomy, UNAM, Mexico.

IceCube and the era of multi-messenger astrophysics

IceCube is part of the network of multi-messenger experiments: searches for neutrinos, jointly with gamma-ray observations, are used to explore the properties about particle accelerators, such as those producing gamma ray bursts, the explosion of stars and their supernova shocks, pulsar wind nebulae or micro quasars and black holes embedded in the core of galaxies. In 2017, the huge effort of physicists was finally crowned with the discovery of the first likely source of neutrinos and gamma rays (the blazar TXS 0506+056): the discovery was published in Science (https://science.sciencemag.org/content/361/6398/147) and marked the dawn of the multi-messenger astronomy in IceCube. 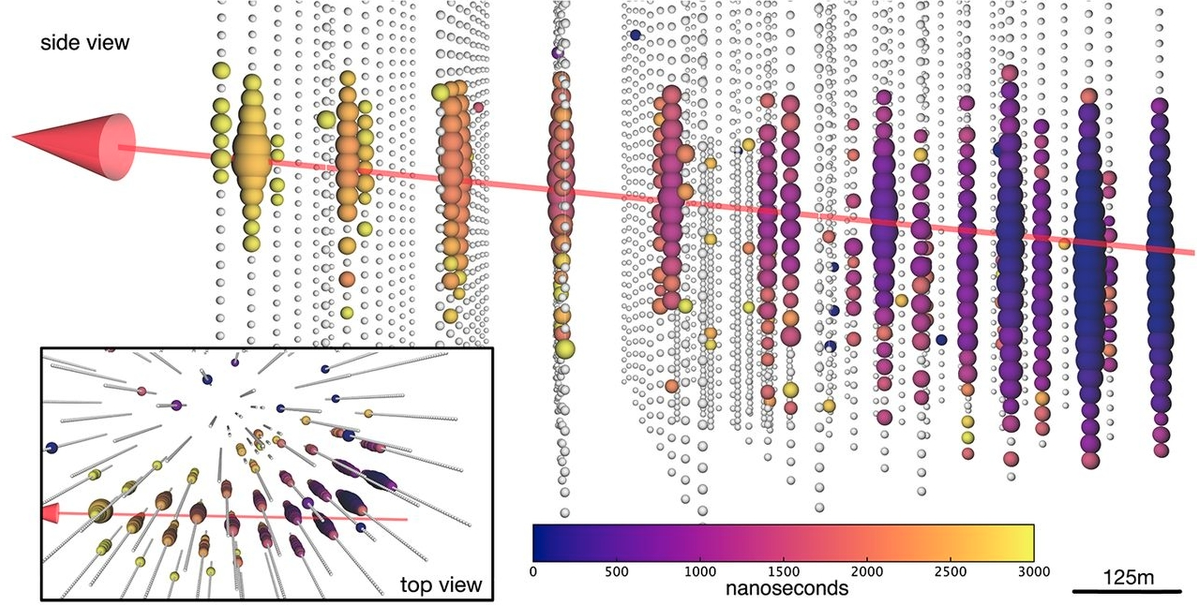 It may seem strange to use the ice, but there are several reasons why it is an excellent location. First, the ice is very clear. IceCube is buried very deep in the ice, about 2000 meters or 1.5 miles.
Second, it is very dark under the ice. This is important because when a neutrino interacts with an atom of ice, a particle called a muon is produced. The muon radiates blue light that is detected by the DOMs. The direction and intensity of the light allow us to determine where the neutrino was coming from.
Finally, the last great thing about the ice at the South Pole is that there is a lot of it! The IceCube neutrino detector is enormous. It uses a cubic kilometer of ice and is the largest neutrino detector in the world.

The detector was completed in December of 2010, thanks to the hard work of the IceCube Collaboration and drill teams. Building IceCube was a unique adventure and engineering project.
To embed DOMs in the ice, we used a special hot water drill. The drill was specially designed at the UW Physical Sciences Lab for the IceCube project as a high-pressure hose that melts through the ice at astonishing speeds. Once the holes are drilled, deployment specialists carefully connect DOMs to a cable and lower them into the hole. Each hole has 60 DOMs on it, and there are 86 holes total.
IceCube has a surface component called IceTop that houses DOMs on top of the ice.
The total cost of IceCube is $271 million USD.

The National Science Foundation provided around $242 million for construction, and the rest was provided by our funding partners in Germany, Sweden, and Belgium.
IceCube is based on a pilot project called the Antarctic Muon and Neutrino Detection Array, or AMANDA. Many people from the AMANDA project are now a part of the IceCube Collaboration. The IceCube Collaboration is responsible for the development, construction, and analysis of data from the detector. Right now, the collaboration includes people from over 30 countries. 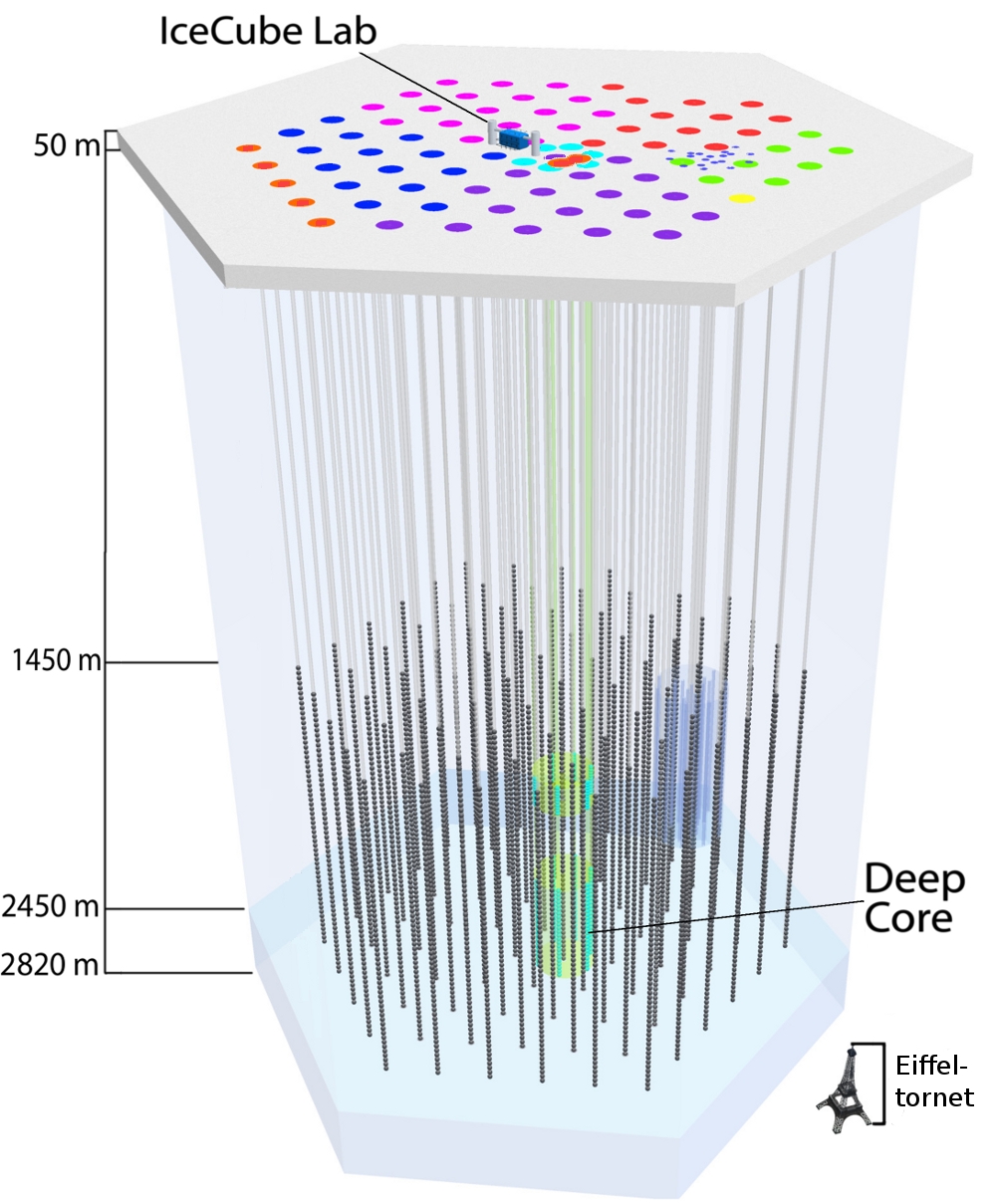