The next generation of Imaging Atmospheric Cherenkov Telescopes will be represented by the Cherenkov Telescope Array (CTA). The construction of CTA is now being carried out by a consortium of scientists and institutes from all over the world. The technical performances will provide the scientific potential needed to address some of the most important questions in this field, such as the origin of cosmic rays, the strength of intergalactic radiation fields, and the nature of dark matter.

CTA will be an open observatory with two main sites: in La Palma aimed at the observations of the northern sky, and in Chile for the southern sky. The two sites will consist of large arrays of IACTs of different sizes, and they will provide a full-sky coverage in gamma rays from 20 GeV to more than 300 TeV. The sensitivity of the instrument will improve up to an order of magnitude the sensitivity of the existing instruments such as H.E.S.S., MAGIC, and VERITAS.

Our group has worked on the creation of a SiPM camera for a prototype of the SST-1M telescope, and is now deeply involved in the commissioning and first data analysis of the first LST.

The LSTs, with their wide reflective surface, will collect light coming from the lowest part of the sensitivity of CTA between 20 and 150 GeV. The design plan consists of four LSTs arranged at the centre of both the northern and the southern sites.
The telescope, planned with a unique design, is provided with an alt-azimuthal mount and a 23 m diameter parabolic reflective surface of 400 m2 . The camera is composed of photomultiplier tubes. Although the big size of LST and the weigh around 100 tonnes, the light design will be able to re-position the telescope within 20 seconds, in such a way to contribute to the follow-up observations of transient events.
One of the most important phases of this project – not only from a mediatic point of view – was the inauguration of the LST prototype in La Palma in October 2018. Additionally, in December 2018, the LST prototype recorded its first Cherenkov light, and at the end of 2019 it detected gamma rays coming from the Crab Nebula. 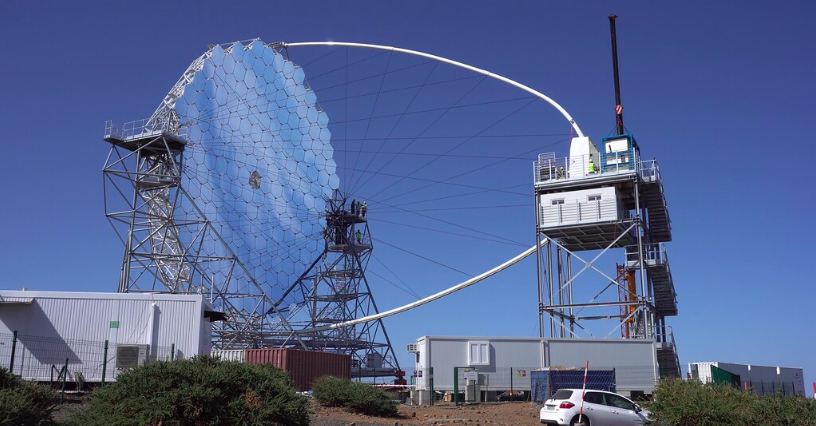