26 avril 2016 : The European Refugee Crisis 2016 and the challenges to Schengen Borders 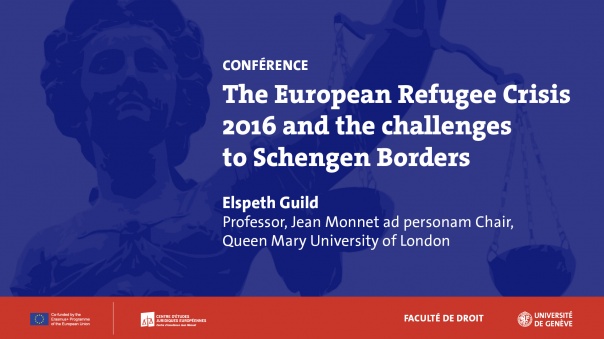 Elspeth Guild is Jean Monnet Professor ad personam at Queen Mary, University of London as well as at the Radboud University Nijmegen, Netherlands. Her interests and expertise lies primarily in the area of EU law, in particular EU Justice and Home Affairs (including immigration, asylum, border controls, criminal law and police and judicial cooperation in criminal matters). She also researches EU privacy and data protection law and the nexus with human rights.

Professor Guild provides regular advice to the European Parliament, the European Commission, the Council of Europe and other European and international organizations (such as the UNHCR) on free movement of persons, migration and asylum.  She has researched the legal and social content of European citizenship and has been invited to submit the chapter on EU citizenship for Blackwells Companion for European Union Law and International Law in 2012.