Recent Research Results From Our Group

Serendipitous Discovery of "Normal", Dust-Obscured Galaxies in the Reionization Epoch

Our view of very early galaxies is highly biased toward rest-frame UV bright galaxies, which can be detected and studied with the Hubble Space Telescope. However, since UV light is highly susceptible to dust extinction, it is still a major open question whether heavily dust obscured systems are being missed in large numbers at these early times.

In our analysis of the ALMA data targeting UV luminous sources from the REBELS survey, we discovered two serendipitous galaxies in the heart of cosmic reionization (at  z=6.6813+-0.0005 and z=7.3521+-0.0005). These newly identified galaxies are completely absent in existing rest-frame UV data, and were only discovered through their far-infrared [CII] lines and dust continuum emission. We find that they have similar star-formation rates (and likely also stellar masses) as typical, UV-luminous galaxies at these epochs. The existence of these heavily dust-obscured, but otherwise "normal'' galaxies suggests that our current census of star-formation in the reionization epoch may be highly incomplete, requiring a significant revision of our understanding of primordial galaxy build-up.

Our results were published in Nature (Fudamoto et al. 2021) and highlighted in an international press release. The discovery of two dust-obscured galaxies (REBELS-29-2 and REBELS-12-2) as neighbors to UV luminous sources through dust continuum and [CII] emission.

Our group has been at the forefront of modeling the emission lines and spectral energy distributions of early galaxies. Based on our new, ultra-deep IRAC data from the GREATS survey (Stefanon, Labbe, Oesch et al., in prep), we have measured rest-frame optical emission lines of almost 100 galaxies at z~8, i.e. ~650 Myr after the Big Bang. Through detailed modeling, we find much more extreme physical conditions and stronger radiation fields in these galaxies compared to their local counterparts of the same mass or star-formation rate (de Barros et al. 2019). This also implies that galaxies are even more efficient to contribute to cosmic reionization than previously thought. Our results were published in an international press release. 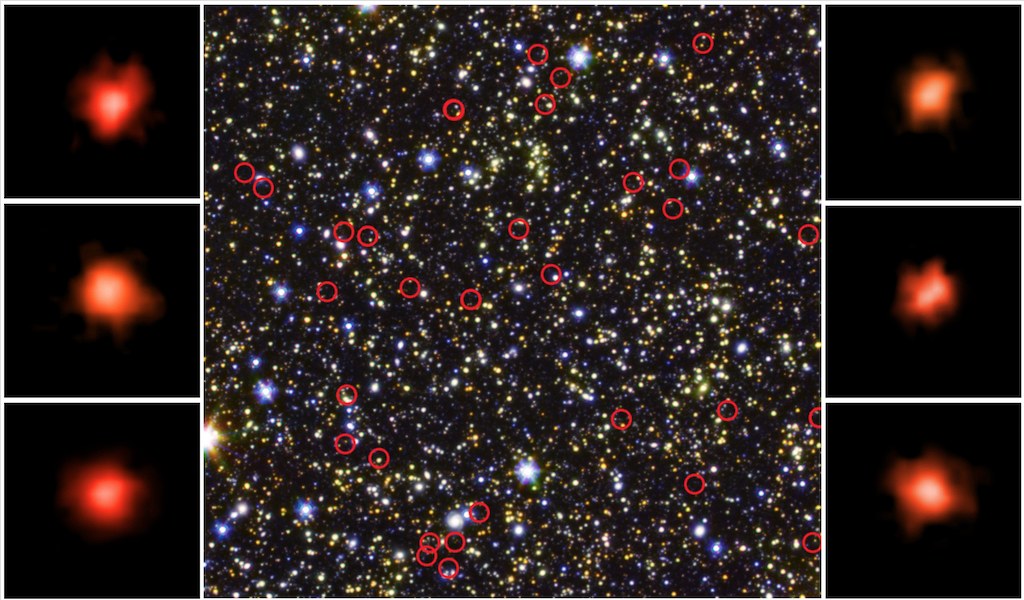 Additionally, we used our measurement of these rest-frame optical emission lines to estimate, for the first time ever, the emission line luminosity function at z~8. This is crucial for planning future observations with the James Webb Space Telescope. Importantly, our data suggests that a much larger number of galaxies will be observable with spectroscopy in the future than estimated based on theoretical or semi-empirical models.

The Most Distant Known Galaxy In the Universe

We managed to measure the distance to the most distant galaxy ever seen in the Universe based on a grism spectrum obtained with the Hubble Space Telescope. The galaxy GN-z11 is seen at just 400 Myr after the Big Bang, when the Universe was a mere 3% of its current age. GN-z11 reveals surprising new clues about how galaxies formed. It shows that galaxy build-up was well underway very early on in cosmic history. 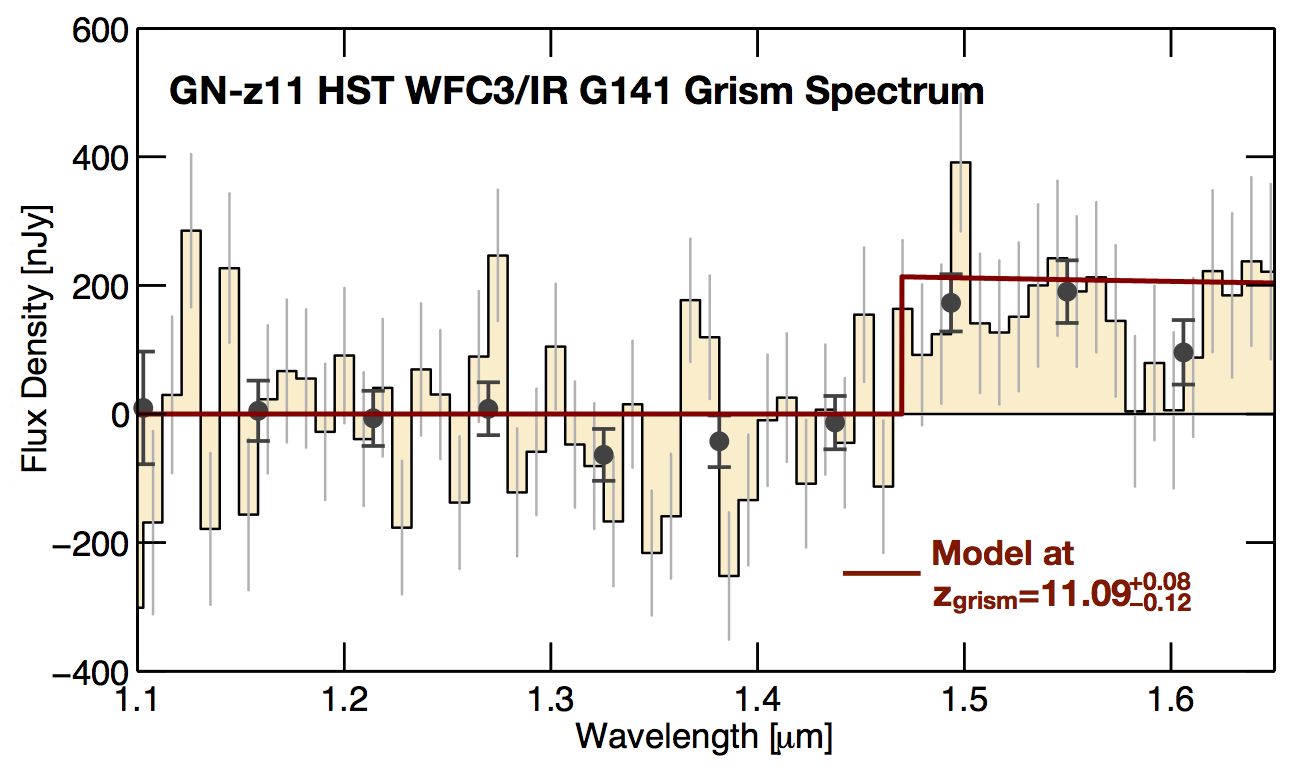 The measurement of GN-z11 represents an immense success for the Hubble Space Telescope. It managed to both find the galaxy in the first place, and now also to measure its distance accurately. The previous distance records all came from galaxies that were found with Hubble, but then confirmed with larger aperture telescopes from the ground.

GN-z11 is still the most distant object known in the Universe. 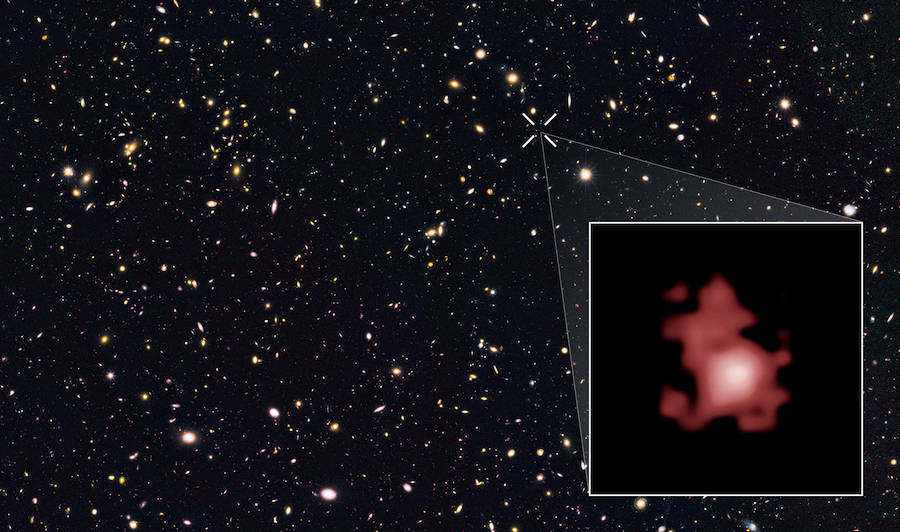 Our understanding of the total star-formation rate density at high redshift depends heavily on very uncertain correction factors due to dust extinction. This is particularly true at z>3, i.e. in the first 2 billion years of cosmic history, where we only have access to rest-frame UV wavelengths for most galaxies. Building on the revolutionary capabilities of the ALMA telescope, we can now for the first time probe the dust of individual, distant galaxies in emission. We are part of several ongoing ALMA surveys to investigate the dust attenuation in early galaxies. In Fudamoto et al (2017; shown below), we studied a large sample of massive galaxies at z~3, as well as a small number of galaxies at even higher redshift based on data in the ALMA archive. At z>3, we progressively find less dust emission from star-forming galaxies. This has important consequences on our estimate of the cosmic star-formation rate density at z>3, and it hints at a delayed dust production mechanism in the early universe. 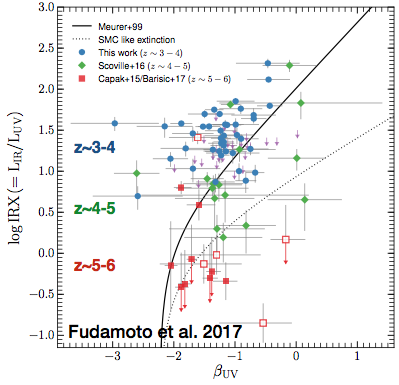 The so-called IRX-Beta Diagram for early galaxies, which relates the dust emission in the far-infrared to the ultra-violet emission of galaxies. The larger the IRX value, the more dust attenuation is present. The beta value represents the color of a galaxy at UV wavelengths. As can be seen from the diagram, the higher the redshift, the less dust emission is detected at a given UV color, which suggests that the dust properties of early galaxies were very different than in galaxies today. (Figure from Fudamoto et al. 2017)

Thanks to large surveys with HST's WFC3/IR camera over the last few years, we have been able to push the observational frontier of galaxies out to z~10, when the universe was only ~500 Myr old. Even though small, the first samples of z>8 galaxies allowed for first constraints on the cosmic star-formation rate density (SFRD) in the heart of the cosmic reionization epoch. However, we are finding a rapid decline of galaxies in the first 600 Myr of cosmic history, indicating that we are approaching cosmic dawn, when the first galaxies formed. The JWST telescope will hunt for these galaxies in the near future. 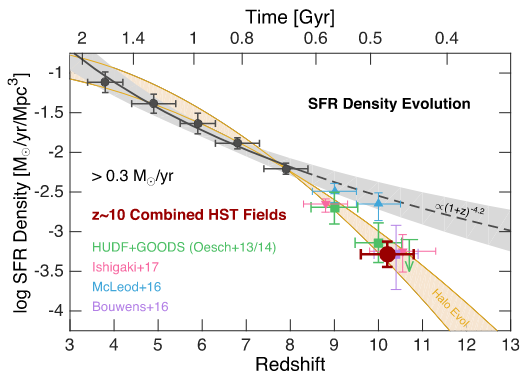 The evolution of the cosmic star-formation rate density at very high redshift from Oesch et al. (2018). Over the last few years, we led the exploitation of all HST fields for z~10 galaxy searches. We are finding a very rapid drop of an order of magnitude in the SFRD between z~8 and z~10, confirming our previous findings. This has important consequences for galaxy evolution models predicting the expected number of z>10 galaxies with the upcoming JWST.

As an example of the power of combining HST and Spitzer/IRAC imaging, we used this to select a sample of very bright galaxies at z~8 with strong rest-frame optical emission lines (OIII and Hbeta). Using the powerful MOSFIRE spectrograph at the 10-m Keck telescope, we recently managed to obtain accurate distance measurements to three such sources based on the Lyman-alpha emission line. This sample contains the two most distant spectroscopically confirmed galaxies. 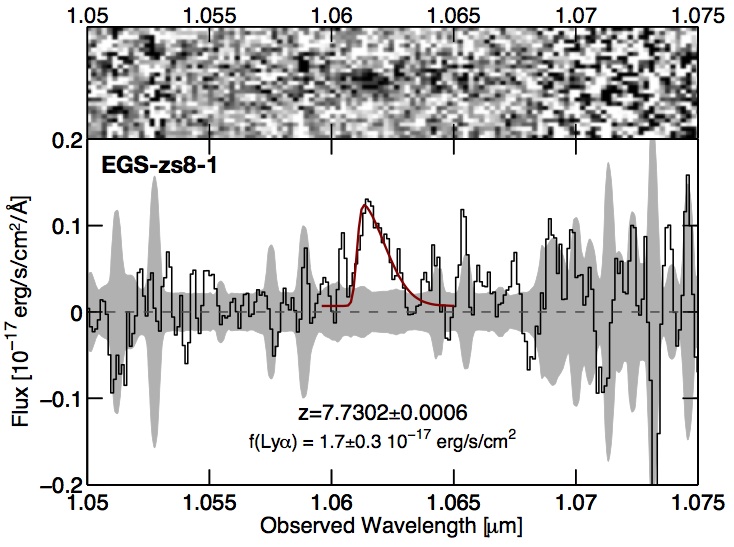 MOSFIRE spectrum of the source EGS-zs8-1 revealing its Lyman-Alpha emission line at z=7.73. This source was selected for follow-up based on deep imaging with HST and Spitzer/IRAC. We see it at a time when the universe was only 670 Myr old, i.e. merely 5% of its present age. (Figure from Oesch et al. 2015)