The important outputs of mass, momentum and energy of massive stars strongly modify their environment and make them key agents in the evolution of galaxies during the whole of cosmic history. Their high luminosities make them objects detectable at far distances in the Universe. Massive stars are thus important probes for studying star formation at high redshifts. As the progenitors of core collapse supernovae, of the long soft Gamma Ray Bursts, and of neutron stars and black holes, they are connected with the most intriguing objects in the Universe.

Their physics is, however, not yet very well known and such basic understanding as the origin of the various massive star populations (Be-type stars, red and blue supergiants, Luminous Blue Variables, Wolf- Rayet stars) are still matters of debate, as well as the nature of the progenitors of the various types of core-collapse supernovae (type IIP, IIL, IIb, IIn, Ibc). 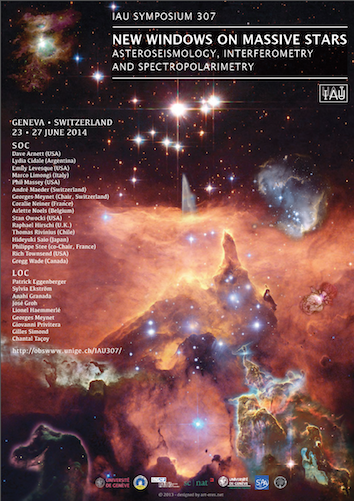