How do plants protect themselves against sunburn?

To protect themselves against type B ultraviolet rays (UV-B), which are highly harmful, plants have developed cellular tools to detect them and build biochemical defenses. A team of biologists from the University of Geneva (UNIGE), Switzerland, discovered the existence of a UV-B receptor a few years ago. Today, these researchers demonstrate how these receptors, once activated by UV-B, associate with proteins that assist them to be assembled in the cell nucleus and to develop responses for survival and acclimation. This study is published in the journal PNAS. 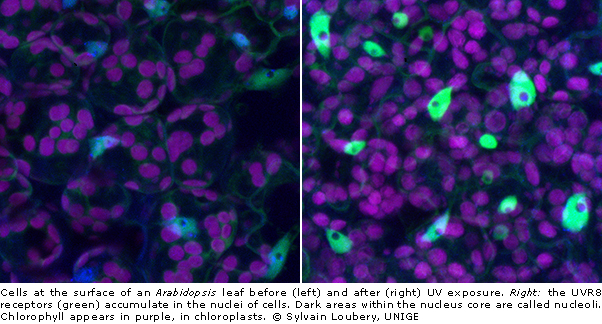 Each color has its own function. This is how plants take advantage of the sun’s energy, of which they capture different wavelengths through specialised molecules. Chlorophyll absorbs particularly red and blue light to produce sugar, while specific photoreceptors detect wavelengths that constitute signals for seed germination, flowering time or plant orientation relative to the sun. ‘Even the UV-B rays, although potentially very harmful, are used to influence the growth and development of plants. The latter must therefore absorb them, while protecting themselves’, says Roman Ulm, professor at the Department of Botany and Plant Biology of UNIGE Faculty of Science.

The researcher and his team identified several years ago a UV-B photoreceptor, called UVR8. The absorption of these rays by UVR8 induces physiological responses that enable the plant to acclimatise and survive. Indeed, plants produce enzymes that repair damage caused to DNA during sun exposure, as well as powerful antioxidants that neutralise free radicals produced by the action of UV. ‘Once activated by UV-B rays, UVR8 receptors accumulate within the cell nucleus and participate in a cascade of biochemical reactions that we are trying to decipher. UVR8 binds to an enzyme named COP1, a step necessary for the plant to build its defenses and to modulate its growth. However, we still do not know the exact roles played by these two proteins’, explains Ruohe Yin, a researcher of the group and first author of the article.

A shuttle to gather the receptors

The biologists were able to identify a novel role of COP1 thanks to new experimental lines of the model plant Arabidopsis thaliana (thale cress) they have created. ‘When the UVR8 photoreceptor or COP1 enzyme were artificially retained in the cytosol of cells, no response was observed in terms of UV tolerance or growth. These two proteins must be present in the cell nucleus for the genes involved in the response to be activated’, says Roman Ulm. The COP1 enzymes, which seem to work as shuttles between the two compartments, allow the collecting of receptors in the nucleus, quickly and in large quantities, so that the process leading to a physiological response can resume.

The researchers intend to use the Arabidopsis lines they have generated to understand how activated receptors regulate the expression of genes necessary for plants to tolerate UV-B rays.