National Centres of Competence in Research

Financed by the Swiss National Science Foundation, it brings together some 250 researchers from all over Switzerland who specialize in the study of genes, chromosomes, and the embryonic development of organisms. Following a review of its first eight years of activity by a committee of international experts, the Center’s mandate was renewed for a third period, from 2009 to 2013.

The Faculty of Sciences houses the administration, as well as 10 out of the 26 laboratories of the National Center. Frontiers in Genetics also include members of prestigious research departments of the Friedrich Miescher Institute, the Universities Zurich and Lausanne and the Swiss Institute of Technology of Lausanne. 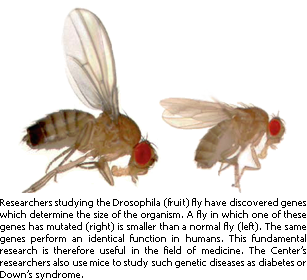 While research is the main activity of Frontiers in Genetics, it is also involved in other key missions. One of them is training future scientists, a need which was met when our doctoral school was established. Every year top candidates are chosen from all over the world. In order to ensure that they choose a thesis project that truly corresponds to their interests and expectations, the students rotate among three member laboratories of the Center during their first year of study.

Another key aim of Frontiers in Genetics is to provide the scientists with an access to the best research techniques available, by optimizing the management of ever-more-expensive instruments.