The idea of a meat-free, vegan or vegetarian, Thanksgiving feast is hardly new, yet menus like the one that appears below – first published more than a century ago – still surprise. Not least because the author, M.R.L. (Emarel) Sharpe engages in a debate between meat-substitutes and plant-based dishes that seems, at first, to be a very twenty-first century issue. As seen in the recipes reproduced below, she insists upon the integrity of plant-based menus, even while she and her second husband, Curtis Freshel, were working to produce animal-free food stuffs and clothing.

Maud Russell Lorraine (“Emarel”) Sharpe Freshel (1867-1949), née Carpenter, was first married to Ernest R. Sharpe. After his death, she married Curtis Freshel in 1917. Her initials, “M.R.L.” led to the nickname “Emarel” that she regularly used. Freshel was a member of the Boston elite and she worked to use her social position to promote her activism on behalf of animal welfare, which she saw as the most effective path to urgent social reform. 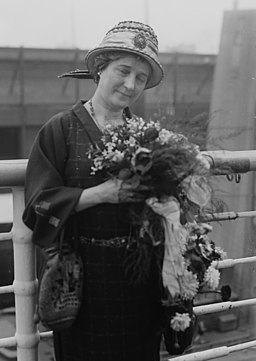 An anti-vivisectionist, she served on the board of the New England Anti-Vivisection Society; she was also active in the Animal Rescue League of Boston. According to Carol J. Adams, in “Feminism, the Great War, and Modern Vegetarianism,” Freshel was a member of the Christian Science church but resigned when the church lent its support to the entry of the US into World War I. In Freshel's estimation, the violence of war was not only inseparable from all other kinds of violence (including against animals) but war legitimates the idea that killing can be justified (246). Her veg*an activism took multiple forms: in 1907 she authored the very popular vegetarian cookbook The Golden Rule Cookbook (first published in 1908); she hosted vegetarian dinners and showed films of slaughterhouses at her home, which was known as Providence House. In 1912 Freshel founded the Millennium Guild, the first animal rights organization in the United States, named after the prophecy in Isaiah 11:1-10 of a day when killing would cease and all creatures would live together peaceably. The goal of the organization was to “teach [that] the foremost among the unnecessary evils of the world, and one which underlies most of the other evils, is the mutilation and slaughter of our fellow creatures for food and other selfish ends” (see Shprintzen). Carol Helstosky names the stage actress Minnie Maddern Fiske as the Guild's most notable supporter, though Freshel was closely associated with prominent veg*ans such as George Bernard Shaw and Leo Tolstoy. The Guild promoted the ethical refusal of flesh foods and faux fur as an alternative to fur fabrics; members wore cotton clothes and avoided all animal-based clothing. J. Keri Cronin reports that “The sale of the cruelty-free outerwear that Freshel sewed helped to fund the activities of the Guild. … Freshel told [a] reporter that members of the Millennium guild 'have found splendid substitutes for furs, feather hat trimmings and kid gloves, and know we are better off without eating meat. We practice the convictions of our minds and hearts.'” An annual vegetarian Thanksgiving dinner was hosted by the Guild at the luxury Copley Plaza Hotel in Boston. Curtis Freshel founded the Millennium Food Company to produce meat substitutes; its most successful product was Bakon Yeast, made from hickory smoke, which is still available.

It is daily less possible to buy turkeys and chickens minus their heads. The delicate death without the use of the old-time axe (which we degraded men and women have thought a pretty symbol to place on Thanksgiving Day table cards) is brought about by hanging the fowls up by the feet, in what fright can be imagined, an incision is then made in the roof of the mouth, and after bleeding to death, which, as in the case of calves or veal, insures solid white flesh, they are served as food to dainty women who can scarcely bear to kill a fly, and alas! to some members of the societies for the Prevention of Cruelty to Animals.

One crate of chickens can encase more suffering than I want endured for me. There is first the terror in capture, then the suffering of being thrust, legs often tied, in the small over-crowded crate, then the journey in the shrieking train, and the thirst-tortured hours in the sun before the final twist of the neck or the blow of the axe, given in many cases just before natural death would render the fowl unfit for sale. And such food, poisoned by fear and suffering, is considered the most delicate, and thought fit to feed to invalids!

That all chickens do not endure the same suffering before death is no excuse for eating them, for some will have to submit to it while chicken is an article of food. The modern invention of fattening fowl by the machine-stuffing method, to make what are called in England “Surrey fowls,” and in America are given various fancy names, is so revolting that it almost makes one faint to read a true account of it. We are selfishly prone to comfort ourselves when these things are brought to our notice with the thought that the lower creatures do not suffer as we would. The fact is that no two live beings suffer the same in any event, physical or mental, but the lower animal or bird or fish suffers in its fear and death all it is capable of suffering, and we have no right to make any creature do this for our pleasure.” (19-20)

Menus in a cook-book are perhaps not always worth the space devoted to them, but as the beginner in Vegetarianism often finds the arranging of a menu in such a way that it does not depart too far from the accustomed manner of serving food the most difficult part of the task she has set herself, a few menus are here given, more with an idea of showing what dishes are most suitable as Entremets, Pièces de Resistance, and Entrées, than with the thought that they will be followed absolutely, for they can of course be changed in many ways, and very much simplified for ordinary use, and amplified for formal occasions.