The aim of sub-project A is to study the explicit stances on medieval theology by Reformed theologians in the Swiss area. In the last decades, the ‘positive continuity view’ about the relation between Calvin and Calvinism (that is, more generally, between the early Reformation and post-Reformation Reformed thought), stressed the constants in the development of Reformed doctrine, rejecting the idea of a betrayal of, or rupture with, the ideals of the first Reformation in early Orthodoxy.  Yet, while it was more than necessary to put an end to this confessionally biased approach to post-Reformation thought, the new 'continuity' paradigm seems to cloud an obvious case of discontinuity: namely the one in explicit stances about Medieval thought. Neither Zwingli, nor Bullinger, Calvin, Viret, or Bèze would have explicitly praised a Medieval scholastic, while Orthodox theologians since the late 16th century did not hesitate to positively refer to thinkers such as Thomas Aquinas, John Duns Scotus, Durandus of St Pourçain, and others. But is this change of attitude also a doctrinal change, or do these references hint at doctrinal continuities that were implicitly present in the first generation of Reformers? To answer this question, sub-project A is interested in both explicit and implicit references to medieval thinkers during the first century of the Reformation. In doing so, sub-project A aims both at an extension and qualification of the 'positive continuity view': on the one hand, on the level of explicit references, it points to the apparent discontinuity in the expressed atti­tude towards Medieval thought between the first few and the later generations of Re­formed theologians. On the other, it argues that on the level of implicit allusions and methodological imitations the doctrinal and methodical continuities between Reformation and post-Reformation thought can be extended to continuities between Late Medieval and early Re­formed theology. 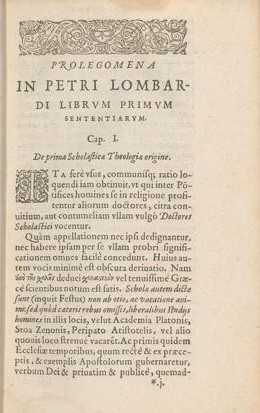