1a. In the laboratory, we carry out apparently simple experiments in which we let diversity develop from a homogeneous beginning. When the bacterium Pseudomonas fluorescens is grown in glass bottles, it increases the complexity of its environment and creates niches for new mutants that arise through evolution. Life itself creates the conditions under which biodiversity can flourish! New bacterial species which evolve under disruptive selection - like the example of the famous Darwin finches - show only slightly different but nevertheless essential phenoytypic characteristics. If the vials are mixed - which destroys environmental complexity - no new species emerge. In a collaboration between NIOO, MPI Marine Microbiology and Paul Rainey at Massey University we set out to map the complex environment which is required for diversification of the bacterial community, heterogeneity in the availability in oxygen. In the study we manipulate the availability of oxygen (slope of the resource gradient) in diffusion chambers, we analyze (micro)gradients in the physical environment using microelectrodes and we assess the resulting microbial diversity on plates.

1b. In this experiment the cyanobacterium Synechocystis and the unicellular green alga Chlamydomonas are grown together as resource competitors for many hundreds of generations. Using serial passage we allow evolution of the two phototrophs under stressful conditions (severe nitrogen limitation). Snapshots from the evolution are stored in a so-called frozen fossil bed. Improvements in fitness are tested in direct head to head competition between ancestor and evolved strain. Adaptations to N-limitation are also tested by growing ancestral and evolved strains - harvested from the serial passage experiment - in chemostats. In the chemostat cells are exposed to transient conditions in the availability of N. Both changes in physiology and in genome wide gene expression are examined during the transient state. What we hoped to find is experimental support for the notion of character displacement, resulting in a reduction in the strength of the competition with time. In fact what we see is that over evolutionary time Chlamydomonas has become much more competitive, the time needed for competitive exclusion of Synechocystis is much shorter for evolved than for ancestral Chlamydomonas.

Vials with mats of Wrinkly spreaders, one of the main morphotypes which evolve in Pseudomonas vials. Evolution of diversity in these vials resembles the process of adaptive radiation that has resulted in the evolution of the famous Darwin finches. 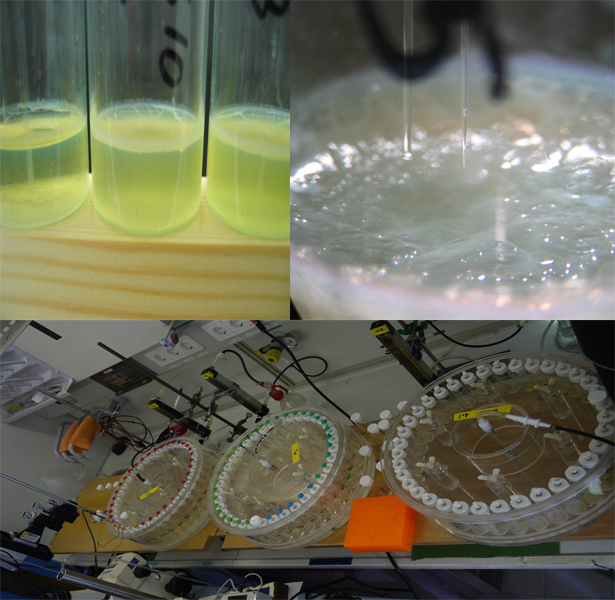