Professor Takaaki Kajita, the 2015 Nobel Prize laureate “for the discovery of neutrino oscillations, which proves that neutrinos have mass”, presented on 12 September 2018 an official statement that the University of Tokyo “pledges to ensure construction of the Hyper-Kamiokande detector commences as scheduled in April 2020”.

The Hyper-Kamiokande (HyperK) detector is an immense underground tank for 300’000 tons of water, whose sensitive volume is about a factor 10 larger than its predecessor, the famous ‘Super-Kamiokande’ (SuperK) (photo1), and also located in Kamioka on the west coast of Japan. HyperK, like SuperK, is positioned on a beam of neutrinos generated on the East side of Japan 300 km away, in the village of Tokai. A near detector in Tokai monitors the properties of the initial neutrinos. One of the purposes of the detector is to study neutrino transformations during this travel, a stunning quantum effect over unusual distances.   It is on SuperK that Takaashi Kajita made the discovery that earned him the Nobel Prize in 2015.

The decision of the University of Tokyo is supported by the Ministry for Education, Culture, Sciences, and Technology (MEXT) which awarded seed funding for 2019. This will allow progress in the preparatory work for construction, and importantly to establish an International Collaboration with the funding agencies of countries whose physicists have expressed an interest. Interest is certainly the case of University of Geneva, which participated in the Japanese neutrino program since 2002. This earned us two scientific prizes and much pleasure. We rejoice in this decision which ensures the continuation of this highly successful and far-reaching program.

This good news is well timed to welcome Prof. Federico Sanchez, P.O., who has recently been nominated to lead the neutrino group at the Département de Physique Nucléaire et Corpusculaire (DPNC) in succession of Prof. Alain Blondel who now retires.

The Japanese neutrino programme has progressed steadily since the 1998 discovery. In 2013 it  established a new type of neutrino transformations  and more recently observed a strong indication of a violation of the matter-antimatter symmetry, neutrinos showing different transformation properties than the anti-neutrinos. For fundamental particles this asymmetry is an important element towards an explanation of the fact that, as far as we can see, the Universe seems constituted of matter. All antimatter, which according to the laws of physics observed in laboratories, should be created during the Big Bang in equal amounts to matter, seems to have disappeared.

DPNC contributed strongly to these experiments. It is involved in the data analysis but also in the upgrade program of the experimental setup. The DPNC group engages in the understanding of the properties of neutrinos and anti-neutrinos, with the completion and preparation of several Master and Doctoral theses (photo2). Recently the DPNC team conceived, built and installed, in  collaboration with CERN, a 75 ton detector (Baby-MIND) aimed at boosting the performance of the near detector (photo3). Alessandro Bravar (MER) is already strongly involved in HyperK, where he leads the group in charge of detector electronics, a pivotal element that must simultaneously be capable of recording the bursts of beam every second, a supernovae explosion which arises without warning every 20 years or so, and the hypothetical decay of one of the  1035 protons contained in the tank. 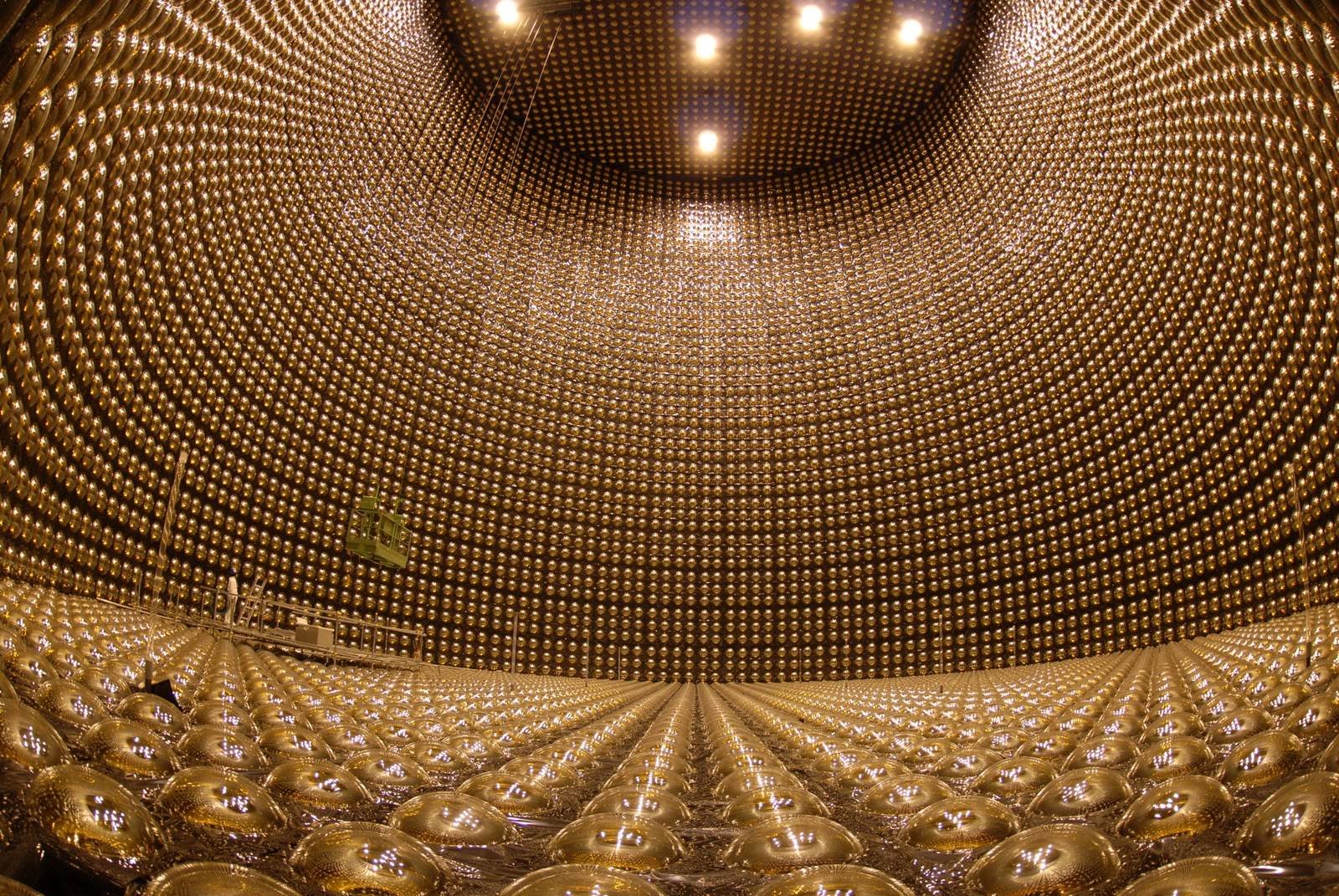 The HyperK detector will be about 10 times larger than SuperK. This picture shows the 40m wide tank of SuperK during a maintenance operation.  One can see part of 10000, 50 cm diameter, photomultipliers installed on the outside of the detector to count Cherenkov photons emitted by relativistic charged particles during their passage through water. 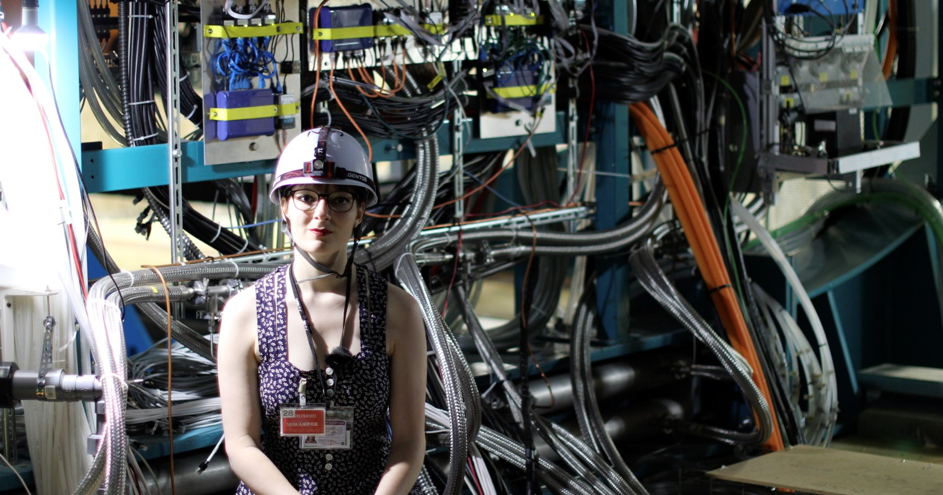 Lucie Maret, candoc at DPNC, taking part in a maintenance session on the near detector at Tokai. 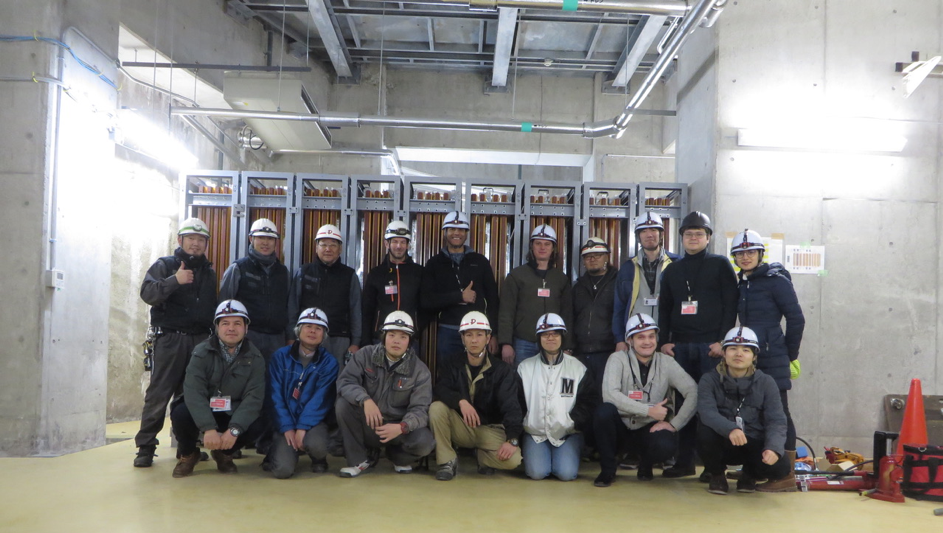 Etam Noah (Collaborateur scientifique), Laurent Nicola (technicien supérieur), Saba Parsa (candoc) pose proudly with collaborators from CERN, Russia and the Japanese team, after the installation of the Baby-MIND in the near detector cavern.