NEWS OF THE DEPARTMENT 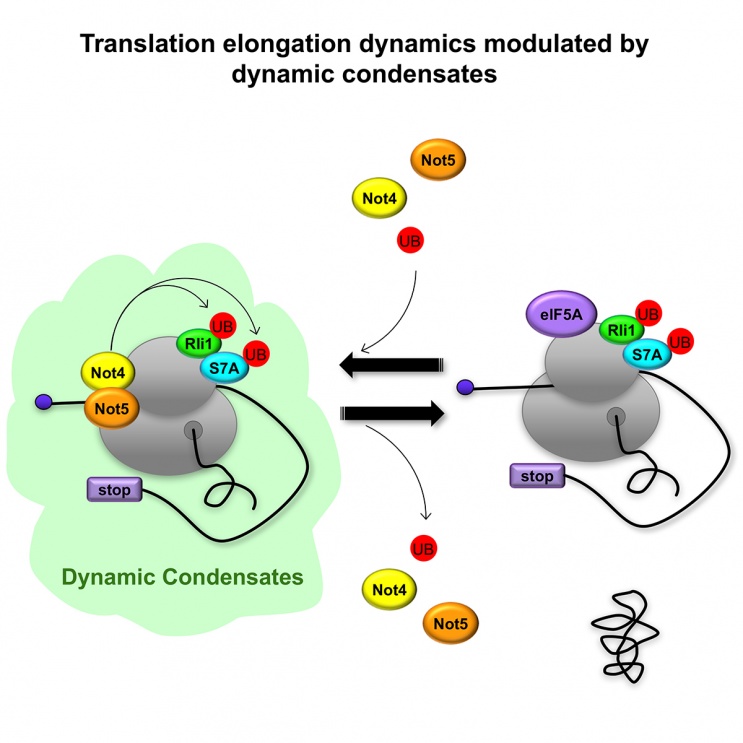 Not4 and Not5 modulate translation elongation by Rps7A ubiquitination, Rli1 moonlighting, and condensates that exclude eIF5A

In this work, we show that Not4 and Not5 from the Ccr4-Not complex modulate translation elongation dynamics and change ribosome A-site dwelling occupancy in a codon-dependent fashion. These codon-specific changes in not5Δ cells are very robust and independent of codon position within the mRNA, the overall mRNA codon composition, or changes of mRNA expression levels. They inversely correlate with codon-specific changes in cells depleted for eIF5A and positively correlate with those in cells depleted for ribosome-recycling factor Rli1. Not5 resides in punctate loci, co-purifies with ribosomes and Rli1, but not with eIF5A, and limits mRNA solubility. Overexpression of wild-type or non-complementing Rli1 and loss of Rps7A ubiquitination enable Not4 E3 ligase-dependent translation of polyarginine stretches. We propose that Not4 and Not5 modulate translation elongation dynamics to produce a soluble proteome by Rps7A ubiquitination, dynamic condensates that limit mRNA solubility and exclude eIF5A, and a moonlighting function of Rli1.

Link to paper : Not4 and Not5 modulate translation elongation by Rps7A ubiquitination, Rli1 moonlighting, and condensates that exclude eIF5A

Allen et al. show that codon-specific translation elongation dynamics are modulated by Not4 and Not5, in coordination with Rli1 and opposing eIF5A function, and according to codon optimality to produce a soluble proteome. We propose that this regulation occurs by dynamic condensates that limit mRNA solubility and exclude eIF5A.

GROUPS AND WORKFIELD OF THE DEPARTMENT

Microbes are not visible to the naked eye. Nevertheless, they represent approximately 98% of the total biomass and it is estimated that our world is colonized by more than 1030 bacteria and even more viruses. In addition to bacteria and viruses, Archaea, fungi and Protozoa complete this microbiological universe. To coexist with these ubiquitous microbes, the human body has developed a sophisticated immune system, not only to defend itself against harmful organisms, but also to tolerate the presence of an astonishingly large number of bacteria. Indeed, the healthy human body requires the presence of a highly diverse microflora to digest certain nutrients, produce vitamins, stimulate the immune system, and defend its host against invading pathogens. The genetic heritage of human beings, the environment, and the ever-present microorganisms therefore shape our health. Thus the threat of infectious diseases may vary from individual to individual and, at a larger scale, presents very different pictures in the industrial and the developing world.

Several years ago, the Faculty of Medicine of the University of Geneva made research on “Host-Pathogen Interactions” one of its priorities. Research in Microbiology and Immunology encompasses a very broad field, from basic to clinical research, including the development of new powerful and rapid diagnostic tools. In addition to fostering translational research amongst clinical and fundamental research groups, the Faculty of Medicine is long known for its strength in Humanitarian Medicine, a field that faces also challenges related to microbes.

Research in our Department includes a variety of microorganisms studied in different contexts; several different bacteria, different  classes of viruses, two apicomplexa parasites and yeast, are actively investigated from different perspectives. Several research groups approach the subject from the side of the host, either in fundamental research or in a clinical context. Inherent to this diversity is a wide range of approaches from classical genetics to molecular techniques including state-of-the-art nucleic acid analysis, proteomics, and imaging.

"How intracellular parasites remodel your cells to their needs" 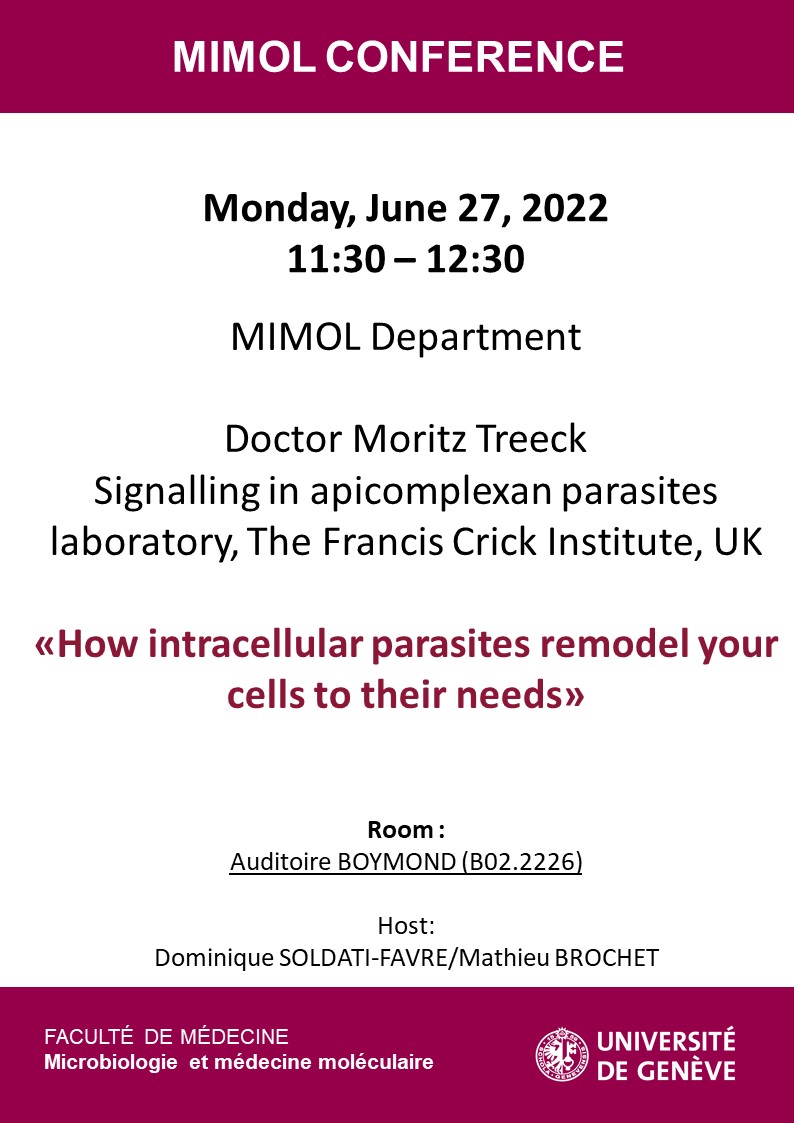