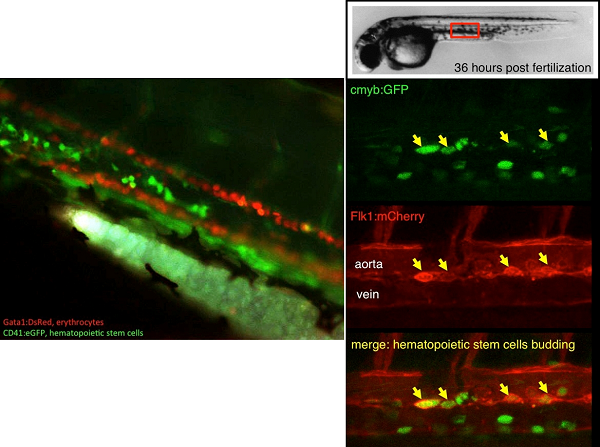 The blood tissue consists of cells with various roles, involved in oxygenation of tissues or immunity. In mammals, these cells are constantly replenished in the bone marrow, from hematopoietic stem cells (HSCs). HSCs are multipotent at the single-cell level, and can self-renew. They derive from a small subset of HSCs produced during embryogenesis. Our main goal is to understand the molecular cues involved in HSC specification, in order to replicate this developmental pathway in vitro, from pluripotent cells, to produce patient-derived HSCs for autologous cell therapy and regenerative medicine.

We use the zebrafish as a model to study blood development. Fertilization occurs externally, producing large number of embryos that can be easily manipulated. Importantly, zebrafish blood cells, as well as the molecular pathway necessary to their differentiation have been conserved with other vertebrates. This allowed the generation of many tools to directly follow the behavior of blood cells in the transparent embryos. Thus, we could show, by combining several approaches, that embryonic hematopoiesis occurs in four successive independent waves, culminating with HSC production from a particular subset of endothelial cells: the hemogenic endothelium. We will study how this particular hemogenic endothelium is specified from lateral plate mesoderm, focusing on the hemangioblast, to understand the contribution of this elusive precursor to the adult blood system, and study the signals involved in the lineage-decision between the vascular and blood programs.

publications of the group