In addition to the practices devised by family foundations, philanthropy is becoming an intrinsic tool for many companies, and is being incorporated into their development goals. Although rooted historically in the English-speaking world, philanthropy is now expanding fast — not only throughout Europe but also in emerging countries such as India, China and Brazil.

"Recent changes confirm that there is a need for an academic approach to strategic philanthropy, together with a more theoretical insight into the sector, which is having a very real impact in development fields such as water, migration, global warming and cultural heritage".

Yves Flückiger, Rector of the University of Geneva and Chairman of the Strategy Committee of the GCP

The Centre for Philanthropy has three missions:

I. To serve as an interface between practice and research.

II. To support the international development and influence of the philanthropy sector in and around Geneva through seminars and conferences.

III. To provide insight into the challenges of philanthropy through an interdisciplinary perspective. 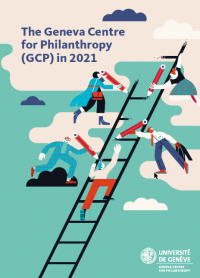