COMAP promises a new frontier in astrophysics and cosmology

Sub-millimeter and microwave intensity mapping observations will usher in a revolution in our understanding of the earliest galaxies in the Universe.

Understanding how the first stars and galaxies formed will fill a major gap in our knowledge of cosmology today. Traditionally, surveys of galaxies, obtained by counting individual objects, have been used to make inferences about the process of galaxy formation.

The technique of intensity mapping is complementary to this approach and allows the scanning of large areas of the Universe in a relatively efficient manner, by measuring the total light emitted from all sources. The CO Mapping Array Project (COMAP) experiment — an international collaboration led by the California Institute of Technology (USA) and comprising members from 11 universities and institutions in North America, Europe and the UK — aims to map the molecule of carbon monoxide (CO), which is linked to molecular hydrogen (H2) in galaxies — and which, in turn, acts as the chief fuel for star formation. CO has been already detected in emission from individual galaxies out to almost 13 billion years in the past, with the help of targeted observations using the Atacama Large Millimetre/sub-millimeter Array (ALMA) and other facilities. However, these efforts are sensitive to only the brightest such emitters, leaving a large population of fainter galaxies still hidden.

COMAP will change this scenario by mapping the integrated emission from the above faint population of sources, enabling a precise count of their contributions across cosmic time. Interestingly, intensity mapping with CO traces star formation, thereby providing a picture of the Universe which is complementary to that from observations of the radio waves of hydrogen [which will be undertaken by experiments like the forthcoming Square Kilometre Array (SKA)].

The results from the first 13 months of observing by the COMAP collaboration are detailed in a seven-paper series, and have all just been published in The Astrophysical Journal. These findings place limits on the molecular gas present in the Universe about 4 billion years after the Big Bang - known as the epoch of Galaxy Assembly, where the star formation in the Universe had reached its peak. Based on the project’s fiducial model, a detection of this gas is expected by the end of an ongoing five-year survey. The next phase of the project will push these results even further out to the epoch of Reionization, another 3 billion years away.

“COMAP — and more generally, sub-millimeter and microwave intensity mapping observations — promises a radical new window into the epoch of Cosmic Dawn - the birth of the first sources of light in our Universe”, comments Dr Hamsa Padmanabhan, Collaboratrice Scientifique II with the Ambizione grant at UniGE, who is a member of the COMAP modelling team. Hamsa's research (Padmanabhan, 2018) had incorporated, for the first time, the different CO observational constraints in a consistent manner into a theoretical framework. Her analysis formed the basis of an updated model developed by the COMAP team for the interpretation of their intensity mapping observations, allowing for upper limits on how much cold gas must be present in galaxies at the epoch of Galaxy Assembly. 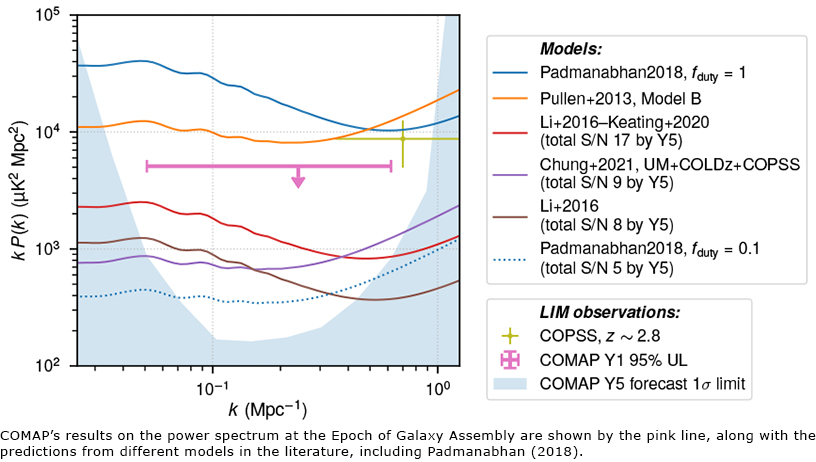