On June 30th, the European Strategy Forum on Research Infrastructures (ESFRI) decided to include the Einstein Telescope (ET) in the 2021 upgrade of its roadmap. This confirms the relevance of this major international project for a next generation gravitational waves observatory for the future of research infrastructures in Europe and gravitational wave research at global level.

The Research Infrastructure Consortium Coordinators, Antonio Zoccoli of INFN and Stan Bentvelsen of Nikhef, are extremely excited about this result.

"We are very pleased for this important result: the ESFRI approval acknowledges the value of our project and strengthens ET at the European level", says Zoccoli. "We will work synergistically for its development, confident that it is strategic to foster our knowledge of the universe, technological innovation and social growth."

“ESFRI status is a major step toward the realisation of this European project, - says Bentvelsen - scientifically the Einstein Telescope is undisputed, and with the ESFRI status there is indispensable recognized support for its quality and impact. We are looking ahead to further develop the plans together with all countries involved.”

The Italian government submitted the proposal on September 9th, 2020 supported by the Netherlands, Belgium, Poland and Spain.

“The preparation of the proposal has been a two years large effort involving several research institutions and universities, now composing the Einstein Telescope consortium, belonging to ten European countries and having real interdisciplinary competences”, says Michele Punturo, Coordinator of the ET-ESFRI proposal preparation.

Since then, several of the people involved were invited to present the plans, to deepen specific aspects of the project and answer questions of the ESFRI evaluation committee. Among them was Marica Branchesi, member of the ET-ESFRI proposal preparation team: “We have worked hard to develop the science case of ET. Each simulation showed us the enormous capabilities of ET observing the Universe. ET will revolutionize our knowledge in fundamental physics, astrophysics, and cosmology”, says Branchesi.

The Einstein Telescope was identified after a long and accurate process of evaluation and selection. During the ESFRI Assembly meeting, delegates officially decided to include the Einstein Telescope in the Roadmap. This official European approval now brings the project into a new phase. The scientific Institutions involved from ten countries (Belgium, Germany, Hungary, Italy, Norway, Spain, Switzerland, Poland, The Netherland, UK) will now have to intensify their research and development work on the Einstein Telescope and gravitational waves. It will also speed up the ongoing subsurface studies for the characterization and evaluation of the candidate sites that could host the underground infrastructure.

A new window on the universe

The Einstein Telescope is a future underground observatory for gravitational waves. The instrument will be much more sensitive than existing gravitational-wave detectors. Therefore, the observatory will enable scientists to peek into the ‘dark ages’ of the universe for the first time. Gravitational waves were detected for the first time in 2015 and offer a new way of studying the universe. Until their first detection, scientists could only study the universe by looking at light or radiation, but with gravitational waves they can observe vibrations of spacetime itself. Although the existence of gravitational waves was already predicted by Albert Einstein a hundred years ago, he did not expect it was possible to ever detect them. Yet with the mind blowing technological developments of the last century, scientists and engineers have managed to reach the sensitivity and precision that is needed to observe them. This opened a new era in the study of the universe, the era of gravitational wave and multimessenger astronomy, and led to a Nobel prize in 2017. The Einstein Telescope will lead to many more unimaginable discoveries in the future in this new field of research.

About ESFRI and the ESFRI Roadmap

ESFRI, the European Strategy Forum on Research Infrastructures, is a strategic instrument to develop the scientific integration of Europe and to strengthen its international outreach. The mission of ESFRI is to support a coherent and strategy-led approach to policymaking on research infrastructures in Europe, and to facilitate multilateral initiatives leading to the better use and development of research infrastructures, at EU and international level. ESFRI's delegates are nominated by the Research Ministers of the Member and Associate Countries and include a representative of the Commission. 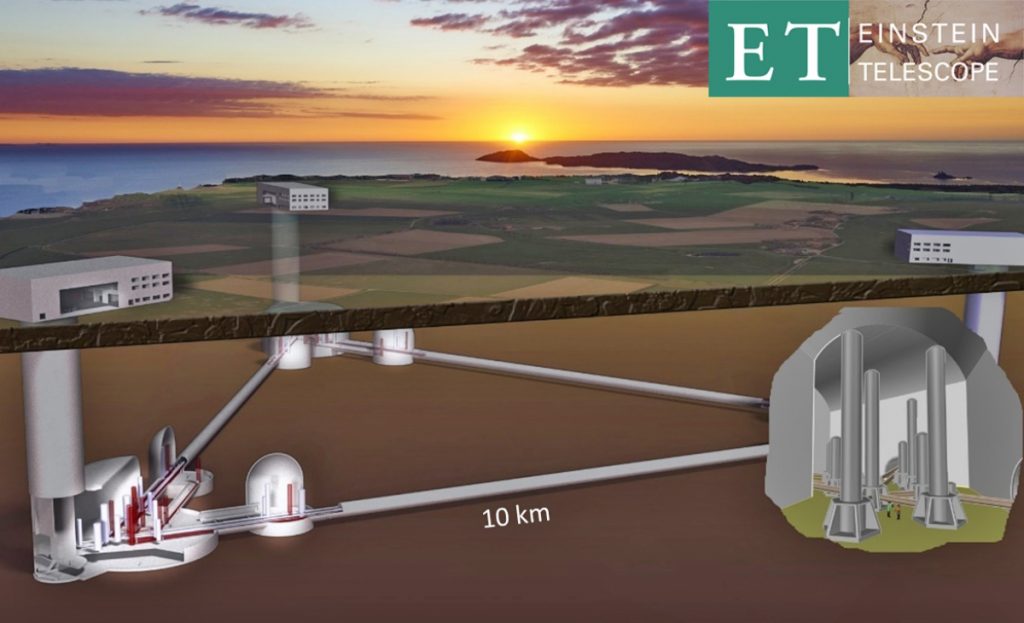 Artistic view of the Einstein Telescope.