Some materials are blessed with somewhat surprising — and undoubtedly very useful — properties. Neodymium nickel oxide, for example, can be either a metal or an insulator, depending on its temperature. This characteristic makes the material a potential candidate for use in transistors in modern electronic devices. To understand how neodymium nickel oxide makes the transition from metal to insulator, researchers at the Paul Scherrer Institute (PSI) and the University of Geneva (UNIGE) studied the material’s distribution of electrons in detail. Using a highly sophisticated development of X-ray scattering, the scientists were able to demonstrate that the electrons re-arrange themselves in the vicinity of the material’s oxygen atoms. The researchers have just published their study in the journal Nature Communications.

Computers, smartphones and all kinds of electronic devices contain tiny transistors as their basic elements. For now, these are mainly made using materials called semiconductors. But it’s possible that one day semiconductors will face stiff competition from a particular class of oxides. Some of these materials can switch from an insulating state to a metallic state (which is electrically conducive) and vice versa, meaning they can also be used to build transistors.

Researchers from Thorsten Schmitt’s team in charge of the PSI research group for the spectroscopy of innovative materials — together with a group led by professor Jean-Marc Triscone from UNIGE's Department of Quantum Physics (and scientists from the University of British Columbia in Canada) — were keen to gain a comprehensive understanding of the phase transition from metal to insulator. They examined one representative of this class of materials: neodymium nickel oxide (NdNiO3). At a temperature of over 150 Kelvin (150 K or 123 ° C), the material is a metal that conducts electricity. Below this temperature, however, it is an insulator and therefore non-conducting.

The mystery of the phase transition

It is the arrangement of the electrons in the material that is responsible for these properties. The researchers wanted to find out what energy states the electrons adopt in the material, or, in this specific case, what the electronic orbitals of nickel and oxygen look like. They attempted to discover what differentiates this electron structure in the two states — metal and insulator.

They conducted the experiment twice: first, far above the transition temperature at 300 K: i.e. in the range where neodymium nickel oxide behaves like a metal. The second experiment was run at the very low temperature of 15 K, well below the transition temperature, and in the region where the material is an insulator. Each measurement taken on its own showed researchers the electronic structure of the material in the given state. Comparing the two measurements revealed the change in the electronic structure that is responsible for the phase transition.

The electrons rearrange around the oxygen atoms

During the phase transition from metal to insulator, the electronic structure of the nickel atoms remains virtually the same. All the action takes place in the six oxygen atoms surrounding the nickel ions that form an octahedron. The oxygen states are mobile (roaming) in the metal phase and become immobile (localised) in the insulating phase with two alternating octahedron sizes. The electronic structure of the material thus differs around the oxygen atoms — and this is what induces the metallic or insulating property.

Theoretical calculations undertaken a few years ago had already suggested that the changes did not take place in the vicinity of the nickel atoms but around the oxygen atoms. And now the researchers have been able to obtain definitive experimental proof.

Thin-film fabrication at the University of Geneva.

The sample of neodymium nickel oxide material was manufactured at UNIGE. For RIXS measurements, it is essential that the material is available as a relatively large single crystal. But for the time being, this can only be achieved in a thin layer. The challenge for the Geneva researchers was to produce a thin layer — using a suitable substrate — whose properties match those of a three-dimensional fragment of the material.

The material’s phase transition between metal and insulator can be realised not only via temperature but also by applying pressure or an electrical voltage. The process will be exploited if, one day, these materials are used in electronics.

As professor Jean-Marc Triscone explains: “This collaboration is an example of the valuable links between PSI and UNIGE. The complementary nature of our research means we can meet challenges together and solve complex problems through open and collaborative science combined with a strong partnership".

This text is based on the PSI press release.
Photo: Sara Catalano, UNIGE ; Thorsten Schmitt, PSI ; Marta Gibert, UNIGE (from left to right) at the ADRESS beamline at the Swiss Light Source (SLS).
© PSI/Markus Fischer 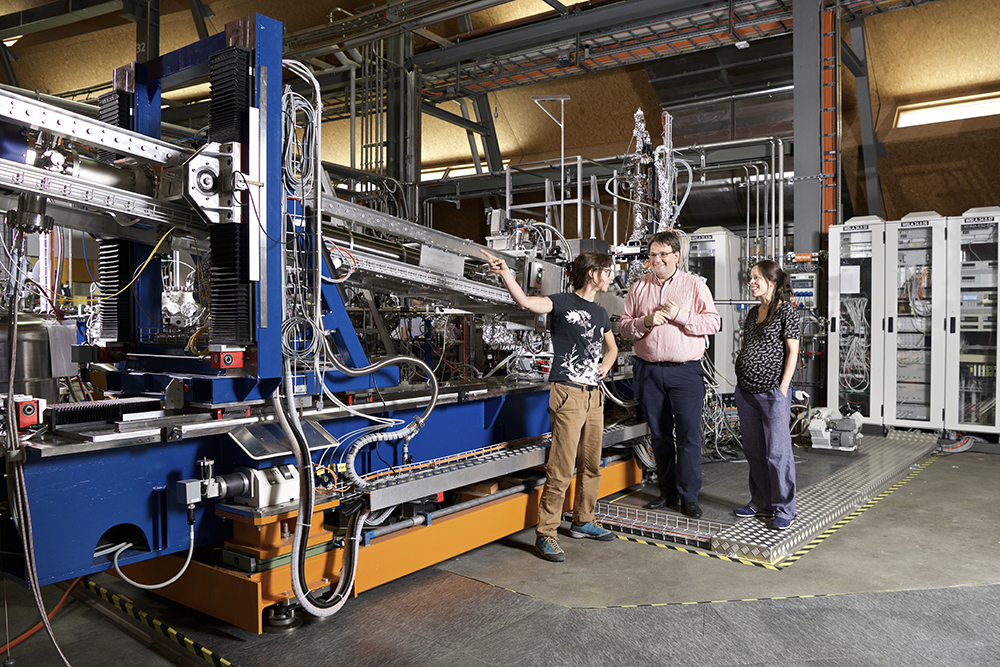