The atmospheres of exoplanets are our observable window on the physical and chemical properties of these objects. In the last ten years, the study of exoplanetary atmospheres has become one of the most exciting and rapidly progressing field in astronomy.

Atmospheric studies of exoplanets are performed with spectroscopy during planetary transits. They have already allowed the astronomers to glance into the exotic atmospheres of the “hot Jupiters”, a category of planets discovered at the University of Geneva. This field of study has also the potential to lead researchers to the identification of life elsewhere in the Universe. This will be achieved by detecting the “biomarkers”, which are the imprints that life forms have on their host planet atmosphere (for instance, the molecular oxygen that we are breathing results from the presence of life on Earth).

To examine the atmospheres of exoplanetary atmospheres, astronomers at the University of Geneva use instruments on space-borne telescopes (Hubble Space Telescope, Spitzer) as well as ground-based instruments, such as HARPS, equipping the European Southern Observatory’s telescopes.

Currently, these challenging studies are only possible for the handful of exoplanets observed in transit across bright stars. To obtain the best possible planets amenable to atmospheric characterisation, it is critical to determine whether the exoplanets discovered with the Geneva radial velocity searches are transiting. This is one of the major goal of the CHEOPS mission. 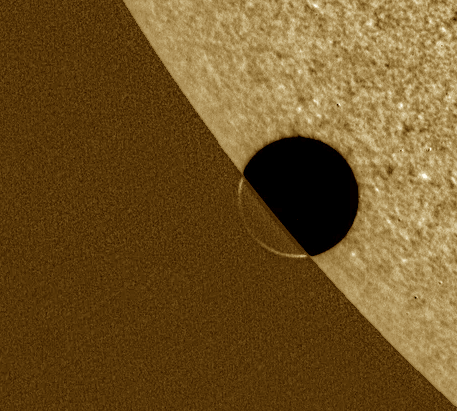 Image of the transit of Venus 2004 (at ingress). During the transit, the stellar light (here, the sunlight) passes through the atmospheric limb of the planet, which is the illuminated arc visible (thanks to refraction in the atmosphere of Venus) on this contrast-enhanced picture. Spectral analysis of this filtered light reveals the structure and composition of the atmosphere.
Credits: G. Schneider/TRACE.