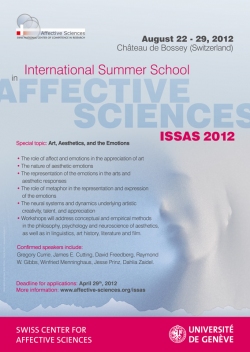 What does the appreciation of a work of art or a landscape consist in? Is there a link between aesthetic appreciation and emotion? One traditional idea is that, among emotions, aesthetic emotions stand as a specific category and play a crucial role in the appreciation of artworks. These are then argued to derive part of their value from their ability to elicit aesthetic emotions in those who contemplate them. Do these emotions actually exist and, if so, what role do they play in the contemplation of art and in our affective lives in general? There are also other fundamental relations between artworks and emotions. Some works of art are valuable partly in virtue of their power to induce non-aesthetic emotions, such as fear, joy or sadness. This seems to depend on their capacity to represent emotions. Yet, what does it mean for an artwork to represent or express an emotion? What is the relation between metaphors and the representation of the emotions? What are the neuronal systems involved in aesthetic experience? How do brain dynamics support artistic creativity, talent, and appreciation? Such questions clearly indicate that a proper understanding of the arts and their power has to take into account their multifarious relations to the emotions.

This summer school aims to bring together and integrate the multiple and complementary ways of investigating the relations between the arts and the emotions. The school will present and discuss fundamental theories, major research paradigms and results, and cutting-edge methodologies from the vantage point of different disciplines, including philosophy, psychology, neuroscience, literature, musicology, rhetoric, literature and the arts. This academic perspective on the arts, the emotions and creativity will be enhanced by reflection on the approach of practicing artists.

In addition to covering the theoretical tools that can be put to work in exploring the relationship between aesthetic experience and emotion, hands-on workshops in small groups will be conducted on research methodologies and empirical methods in the philosophy, psychology and neuroscience of aesthetics, as well as in linguistics, literature, film and art history.

The scientific coordination of the 2012 edition of ISSAS was carried out by Dr. Florian Cova, a postdoctoral researcher at CISA heading a project on the development of experimental methods in aesthetics and philosophy of art through a Cogito Foundation grant, and coordinating a second project on the role of emotions in moral cognition.